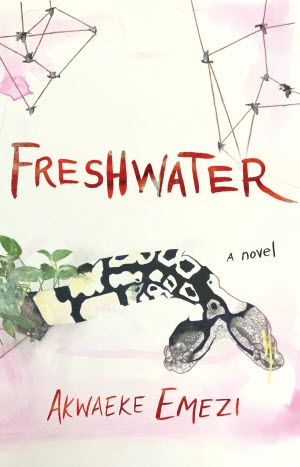 Let’s get the headlines out of the way first. Freshwater was the winner of the Otherwise (formerly Tiptree) Award this year. It was also longlisted for a couple of UK-based literary awards: the Wellcome Book Prize and the Women’s Prize for Fiction. The latter may have been rescinded now that the people running that prize have gone full-on transphobic. So this is a book that is accepted by both genre and literary communities, and is being praised by both.

For almost half the book I was somewhat surprised by this, in that despite the use of fantastical themes the book appeared to be that tiresome trope of literary fiction: awful people doing awful things to other awful people for no reason other than it is all awful. But the fantastical background itself was interesting, and eventually the book became so as well.

The central character of the book is Ada, a young Nigerian woman who, from birth, has been plagued by ọgbanje. These are spirits from Igbo religion who are believed to get into a child at birth and cause bad behaviour and misfortune for the family. The Wikipedia entry for ọgbanje draws a parallel to the Celtic concept of a faerie changeling. That’s obviously not accurate because a changeling is an entirely different being, whereas ọgbanje simply inhabit the original child, but the effect on the family is presumably similar.

There are, I am sure, many litfic readers who see this book simply as a clever metaphor for mental illness, in particular for multiple personalities. And to be fair Akwaeke Emezi gives plenty of excuse for that reading via the descriptions of Ada’s dysfunctional and occasionally abusive family. However, Freshwater is much more than that. If you want a book about multiple personalities, Matt Ruff’s Set This House in Order (also an Otherwise, then Tiptree, winner) fits the bill very well.

In the Acknowledgements, Emezi mentions a friend describing Freshwater as “the spiritual book”. Odiani is a living religion, and Emezi has as much right to believe in ọgbanje as Christians have to believe in angels and demons.

There’s more. As this essay makes clear, Freshwater is very much a book about Emezi’s personal journey. They are non-binary, and the book is heavily informed by personal experiences. The second half of the book, when Ada is an adult, features two specific ọgbanje called Ashụgara and Saint Vincent. The former might best be described to Westerners as a succubus, while the latter is defiantly, if not aggressively, masculine.

It is clear from the book and the essay that Emezi uses the concept of ọgbanje as a way to come to terms with their non-binary nature. It is fashionable these days, at least in the UK, for trans people to decry the idea of being “trapped in the wrong body”, claiming that it is a narrative that was created for us by cisgender medics. In part, of course, that’s true. Certainly by no means all trans people feel extreme body dysphoria. But it is also necessary because the phrase has been weaponised by the anti-trans lobby who claim that it obviously can’t be true, and that it is proof that trans people are mentally ill.

Nevertheless, if you are a spiritual sort of person, the idea that your soul is a different gender to your body is a very persuasive explanation as to why you might be trans. I’d not seen such a clear spiritual explanation of gender fluidity before Emezi’s book, but it makes sense in exactly the same way.

I’m sure that here in the Land of Transphobia there are people jumping up and down with glee at Freshwater because they see it as an excuse to have all trans people put in straightjackets and solitary confinement. Equally there will be trans people who are uneasy about the book because they can see that coming. Personally I believe that trans people need to find their own truth in whatever way works for them, and provided that they do not misuse that truth, by insisting that it must apply to every other trans person as well, then I’m happy to let them have it.

I should add as well that Freshwater is beautifully written, albeit deeply painful at times. I am not in the least bit surprised that it gained so much recognition. There are also a bunch of themes in the book dealing with issues of mixed-ethnicity families, migration, and conflict between Christianity and traditional religion. Those are things that I am much less competent to talk about, but which add even greater depth to the book. It is a very impressive achievement.