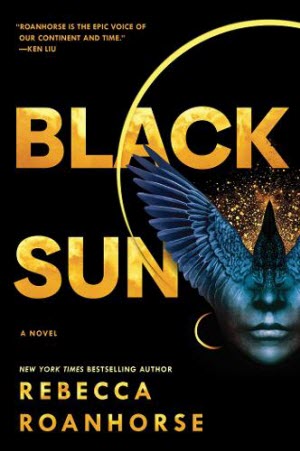 It is epic fantasy, Jim, but not as we know it.

I have been looking forward to this book for some time. I really enjoyed Rebecca Roanhorse’s Sixth World books, and was looking forward to seeing what she could do with a more traditional fantasy form. I say “form” and not “setting”, because while Black Sun is absolutely epic fantasy, it has nothing to do with mediaeval Europe. Instead is makes use of the history of North and Central America. Unlike Aliette de Bodard’s Obsidian and Blood series, there is no attempt to reproduce an actual historical setting. Rather the book is more like CT Rwizi’s Scarlet Odyssey in that it creates a fantasy world from non-European inspiration.

The book is centred on the city of Tova which is ruled over by four competing clans: Golden Eagle, Carrion Crow, Winged Serpent and Water Strider. Supposedly holding everything together is a Temple of the Sun and its priestly orders. However, a couple of generations ago the Temple launched an attack on the Crow clan, known as the Night of Knives. Large numbers of Crow people were killed.

The current High Priestess of the Sun, Naranpa, firmly believes that her duty is to keep peace in Tova, and to heal the wounds caused by this massacre. However, she rose to her position due to being a genius astronomer rather than because of her social class, and this causes many people in the Temple whose expectations of privilege have been thwarted to resent her.

Meanwhile, the devotees of the Carrion Crow have not forgotten the massacre. One extreme sect has concocted a plan for revenge by forging a weapon, an avatar of the Crow God. When we first meet him, Serapio is a young boy suffering an incredibly abusive childhood, but his mother’s mad plan succeeds and in the main narrative of the book he is everything she hoped for.

To protect him, Serapio was hidden away in the Obregi Mountains far to the south. He must take ship from the merchant city of Cuecola and reach Tova in time for a major eclipse, at which point the power of the Sun Priests will be at its lowest ebb. Because he is running late, he ends up taking passage on a ship captained by Xiala, a wild and enthusiastically bisexual woman of the Teek people, who live far out in the Crescent Sea.

That gives you the three main characters of the narrative. There are a few others. There’s Abah, the young Golden Eagle noblewoman who constantly schemes against Narapan. There’s Iktan, the High Priest of Knives, who is non-binary and the closest thing Narapan has to an ally. And there’s Okoa, the warrior son of the head of the Crow Clan, who rides a giant battle crow. It is all solid epic fantasy stuff.

Roanhorse knows exactly what she is doing with the form, though if her Acknowledgements are to be believed she had to learn a lot of it from her editor, Joe Monti. Fantasy fans should lap it up, and be clamouring for book two. It does, of course, end on something of a cliffhanger, and there’s plenty of the world left to explore, so I’m looking forward to subsequent books. As is the way of such things, being merely a part of a much longer story will hamper Black Sun come awards season, but shouldn’t hold it back sales-wise. I’m delighted to see that a UK edition will finally appear in January (and despair at the fact that Simon and Schuster initially thought that UK readers would not be interested in it).

Of course with such things readers will be interested in the inspiration for the fantasy world. Black Sun is set in the lands surrounding the Crescent Sea, or the Gulf of Mexico as we know it. The Obregi Mountains are the uplands of central Mexico, and Cuecola is Chichen Itza. The Teek live far out in the Caribbean, though they have some Polynesian influences. The most audacious adaption is Tova itself, which is based on Cahokia, a large city on the Mississippi near St. Louis which, in the 11th Century, boasted a population of up to 30,000 people. I think that’s bigger than any European city of the time, and bigger than Timbuktu at the height of the Mali Empire. Constantinople was much bigger, of course. There’s an article about Cahokia and the people who built it, written by Annalee Newitz, here. The city will also feature in Newitz’s non-fiction book, Four Lost Cities, forthcoming in March next year.

Back with Black Sun, however, it is a fine piece of epic fantasy, with a stunning John Picacio cover. It is already getting rave reviews, so my voice isn’t going to add much, but I did love it, and I hope you will too.