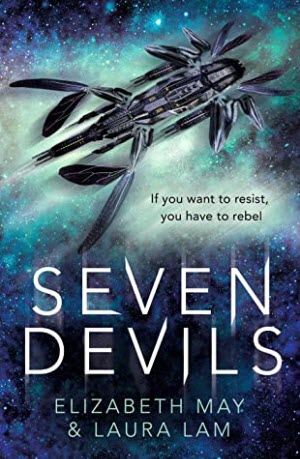 I wish I liked this book more than I do, because parts of it are a lot of fun. Parts of it, however, have me rolling my eyes.

One of the causes of this is the fact that the book is very much written to wind up the sort of people who complain about having too much “politics” in their science fiction, when what they actually have is a diverse cast of characters. The little group of plucky rebels fighting against an evil galactic empire that star in this book tick just about every diversity box going, except that there are no men. It is a fun joke, but perhaps too obviously a wind-up.

Another issue is that the book seems to be scripted as if it was a TV series. The plot really doesn’t hang together very well, the villains are cartoonish, and it is full of obvious cliché action sequences: trapped in an elevator shaft, dodging a security laser field, flying through an asteroid belt and so on.

However, Seven Devils has a lot of good points too. And I suspect that Elizabeth May and Laura Lam had a lot of fun writing it. Possibly quite a bit of whisky too. Or cocktails; whatever floats their boat, but they are based in Scotland. Here’s some stuff I liked.

Rhea, the reformed Courtesan, is not just a tart-with-a-heart. May and Lam have thought about how to make her useful to the team. Ariadne, the autistic software wizard who was raised by the Evil Empire’s AI also has a really interesting backstory.

There’s the occasional reminder that we are in a space opera:

Nyx made her way around the bridge. “All out like newgrowns still wet from the vat,” she confirmed.

And the evil Prince Damocles is a beautiful portrait of toxic masculinity in action.

Plus, why can’t women have a bit of rollicking space adventure action for themselves for once? Men have had plenty of corny nonsense to enjoy for decades. It is about time we had some of our own.

Finally, at some point in one of the sequels there will be probably be an opportunity for lots of people to shout, “Hail Eris! All Hail Discordia!” Which for some of us of a certain age will be a delightful moment.