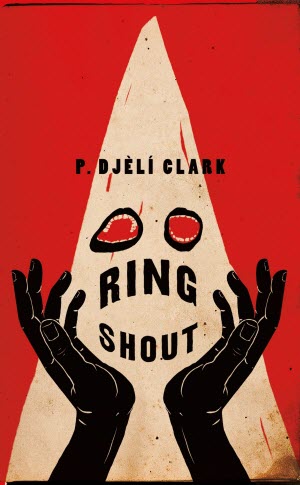 It is entirely true that Phenderson Djèlí Clark is one of my favourite writers right now. I have loved everything he has done to date, and Ring Shout does not disappoint.

As the cover suggests, this is a story about the Ku Klux Klan, but it is not quite the Klan as we know it. Thanks to some of the leading members of the organisation dabbling in evil magic, strange creatures have found their way through to our world from a parallel universe, and they are posing as Klan members in order to stir up more of that delicious hatred on which they feed. If you happen to be an actual demon, running around in long white robes and a big, pointy white hood is a very useful disguise.

Ranged against them is a group mainly formed of black women. Our narrator is Maryse Boudreaux, who has a magic sword. Her best friends are Sadie, who is a bit of a firebrand and a dab hand with a rifle, and Chef, who dressed as a man to fight in WWI and is useful with explosives. They form a very effective monster-hunting team. Their boss is an old witch woman called Nana Jean, and back at HQ (and old farm) they have backup such a Molly Hogan, a scientist of sorts, and Emma Krauss, a German woman with a penchant for revolutionary Communism.

Most importantly, Nana Jean has a group of people who can perform Ring Shouts. These are religious rituals supposedly first practiced in slave communities in the Americas, but which I suspect owe a lot to similar ceremonies held back in Africa.

Clark has a lot of fun introducing various unsavoury aspects of 1920s America, including Prohibition and the odious DW Griffith who not only produced the hugely racist film, Birth of a Nation, but was also the first person to use a transphobic joke in a movie.

The book is a novella, so there’s not a lot of depth to the plot, but there’s plenty of character work. Maryse, in particular, has a string narrative arc. I particularly liked the fact that her boyfriend gets captured by the bad guys and she has to rescue him. I was a little nervous about Clark writing a story about three rambunctious women with active sex lives, but I think he has done a decent job of that side of it.

And in the middle of all that, there’s a little nod to Falcon from the Marvel movies.

So yeah, Ring Shout is a lot of fun, and I cannot wait for Clark’s debut novel next year.