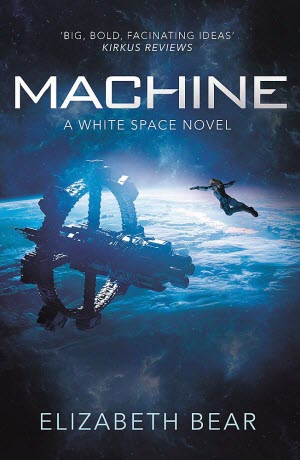 Somewhat to my surprise, Machine is Elizabeth Bear’s thirty-second novel. It shows. This is a second book in her White Space series of space opera books, and it is very assured. There is some possibility that the White Space series is named, in part, for the Sector General books of the legendary James White, and this book introduces us to Bear’s future hospital.

Machine, then, is not a direct sequel to Ancestral Night. There’s no Haime Dz, and Singer, the spaceship from the first book, only makes a guest appearance. Machine centres on Dr Brookllyn Jens and the crew of I Race to Seek the Living (aka Sally). They are a search and rescue crew, whose job it is to answer distress signals from spaceships with medical emergencies. Dr Jens is the crew member who gets to board stricken spaceships to determine if they are safe, and possibly haul the injured out of something that is about the explode.

For their latest mission, Jens and her colleagues have been sent to investigate an ancient generation ship called Big Rock Candy Mountain. It has recently been discovered by a ship crewed by alien methane breathers. On arrival Jens finds the two ships docked, and the aliens comatose. The crew of the generation ship are all in cryo tanks, save for a fembot who gives her name as Helen Alloy, and who seems to have some serious psychological issues after so long alone. Oh, and if this is indeed a ship from Earth there’s no way it should be where it is, traveling at the speed it is.

It being their job, our heroic medics take both ships in tow and haul them back to Core General, the main hospital at the centre of the galaxy. Saving lives comes first, figuring out the mystery of what happened is a job for someone else. Sometimes heroic medics can be spectacularly foolish.

Most of the action is set in Core General, and this does reunite us with one character from Ancestral Night, Constable Cheeirilaq, the mantis-like alien who is what passes for law enforcement in the White Space world. Complicating matters is the fact that the hospital’s expert in cryonics, Dr Rilriltok, is a male of the same species.

Rashaqin reproduction is harrowing. Their entire social order is built to keep adults well-separated, with lots of private space, so they don’t accidentally eat one another. The spawn are aquatic and generally not considered to be sentient until they pass through the nymph stage and emerge on land in their penultimate instar as miniature adults. At this point, they are taken into crèches and educated by carefully organised, regimented communities of adults.

This is probably for the best, as the spawn are both numerous and cannibalistic. On Rashaq, they’re left to themselves until they moult out into that educable stage.

At times it seems like Bear might have been listening to one of my lectures on worldbuilding with sex and gender, except that I know that Bear is smart enough to have done all of the research herself without any of my help.

There is some exploration of human behaviour as well. Cheeirilaq doesn’t understand why humans mostly subscribe to binary gender when someone like Jens is a lesbian and quite masculine in gender presentation.

I laughed. It was charming, for a creature entirely out of nightmare. Comparing it to the almost embarrassingly adorable Rilriltok, I could see what it meant about my species’s lack of dimorphism. “I don’t think of myself as very strongly gendered. And I could elect a genderless identity, or a mixed-gender identity, if I preferred.”

Wouldn’t that be less work?

And your conceptual space is woman.

“For now. Identities can be fluid over lifetimes, after all.”

The observant among you will have noticed that, despite their high degree of sexual dimorphism, the Rashaqin use “it” as their pronoun. Somehow I want to get that exchange into my trans awareness courses.

All of the above, however, is a bit of a side-track. The main thrust of the plot is about a virus, which is fortuitous considering that Bear must have written most, if not all, of this book before the COVID-19 pandemic hit. It is also about socialised medicine, which is a very hot topic in both the USA and UK right now.

To sum up, an excellent science fiction novel by a very assured writer who is just as at home referencing the history of the field as she is diving into contemporary politics. Thirty-two novels in a 15-year career, and achieving this level of quality, is an impressive achievement.