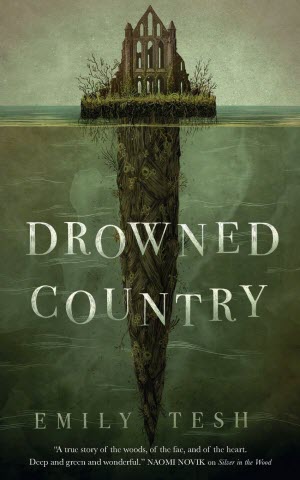 When I read Silver in the Wood I was a bit thrown by an apparent change in the book. It started off as a serious and spooky woodland-based fantasy, and then morphed into a gay romance set against a background of a Victorian-era monster hunter story. With The Drowned Country I knew exactly what to expect, and enjoyed the book a lot more as a result.

If you haven’t read Silver in the Wood, you might want to look away now, as it is hard to talk about the sequel without dropping clues to what happened in the first book.

Having become the Guardian of Greenhollow Wood, Henry Silver has settled into a life of indolence. What else is there to do with his seemingly endless life? Also he is sulking, because Tobias Finch has gone off with Henry’s monster-hunting mother to help her rid the world of evil. How desperately dull, right?

Oh dear, Henry. Fortunately salvation is at hand, in the form of a visit from his mother. Adela Silver has a particularly complex case. A young woman has been abducted by a vampire. She and Tobias need help. Would Henry kindly agree to provide it?

Things don’t go entirely as planned. Indeed, it would be fair to say that they don’t go at all as planned. Unless, of course, Mrs. Silver had some cunning scheme of her own to get Henry back on his feet.

Mostly, I think, Tesh is just having fun. That’s fine. However, she did an interesting interview for Breaking the Glass Slipper in which she talked a bit about how Henry and Tobias differed in their approach to acquiring magical power. The two novellas are as much a character study as anything else.

Personally I’d quite like a book about Adela Silver, Monster Hunter. But then again I’d also like to see Tesh do something that uses her Classicist background, because she certainly understands Greek goddesses.