Shadow in the Empire of Light 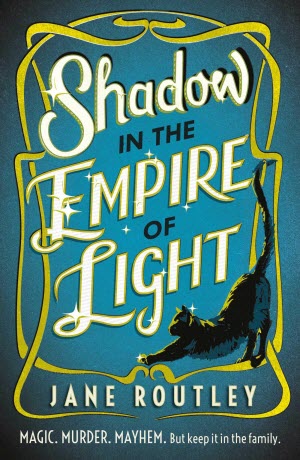 Declaration of interest here: Jane Routley is a dear friend from my days living in Melbourne. I reviewed several of her books in Emerald City. She rather fell off the radar for a while, but she’s recently signed up with top British agent, John Jarrold, and she has a new book out from Solaris.

Shadow in the Empire of Light will, I guess, be characterised as fantasy comedy Regency romance, but it is actually quite a bit more than that. The world in which it is set does seem to have some connection to Regency England, but the existence of magic has made a significant difference to society. Inheritance of magical talent is genetic, which helps the nobility keep control. But not every child will be a mage, so noble families are very much split between those who have the talent and those who do not. Also magic is much stronger in women than in men, so the society of the Empire of Light is a matriarchy.

Our heroine, Shine, is a minor member of the Imperial Family. She has no magical talent, but she is quite smart and does a good job running her family estates while her magically talented relations are off in the capital conspiring against each other. She is good at managing the peasantry (mainly because she respects rather than despises them). And she also has to worry about her poor Aunt Effulgentia.

Explaining that issue requires delving a bit more into Empire society. Yes, it is a matriarchy, which is good for women. One of the advantages that brings is that women are allowed to enjoy sex, and pick and choose their partners. This provides for some fun, though if you happen to be allergic to sex scenes you might want to avoid this book. However, matriarchy, coupled with the genetic nature of magical talent, brings with it a focus on reproduction. And that means that Empire society is horribly homophobic.

Aunt Effulgentia’s problem is that her only son, Bright, is in disgrace due to being gay. He’s supposedly banished to some frontier military outpost, but we are coming up to Blessing, the main religious festival of the Empire year, and he has risked a visit home. He knows he’ll get a welcome from cousin Shine, and he figures he can be away again long before the rest of the family arrives from the capital.

One of the reasons that Bright is making a visit is that he has a fugitive with him: a ghost. Ghosts are people from the cold lands to the south (Routley is Australian, remember). They are called ghosts because they have pale skin and hair, quite unlike the healthy brown skin of the people of the Empire. This chap is called Shadow, so although Shine is our heroine, this book is about him.

Why is Bright brining this fugitive foreigner into potential danger? Well you will have to read the book to find out, but it does set us up for a fair amount of comedy with people hiding in cupboards and under beds. Also ghosts are very prudish about sex. Silly people.

Of course the ghosts speak a different language. Shadow is quite competent at the language of the Empire, but he’s useless when it comes to colloquialisms. That leads him to say things like, “My excrement was almost scared out of me.”

The other main comedy element is Shine’s pet, whom she has given the imaginative name of Katti. Like felines everywhere, Katti is fierce when need be, but otherwise entirely out for herself.

Why do you speak with her when I am here? Thought Katti, purring imperiously and nudging the back of my head again. I require food.

Yes, Shine is in telepathic contact with Katti. And yet she has no magical talent. This is not explained.

Inevitably Shine gets herself into all sorts of trouble. Most of her relatives seem to be utterly awful people. Along the way we learn much more about her world, and there is plenty left unexplained for sequels. Hopefully there are some on the way.

I should note that the Empire is not intended to represent any real-world civilisation. Rather it is poking fun at British attitudes to race by making the arrogant nobility non-white. In a similar fashion, a society that we might expect to be very prudish is shown to be anything but. Routley neatly deconstructs Regency romance in all sorts of ways.

I very much enjoyed this book. Hopefully some of you will too.