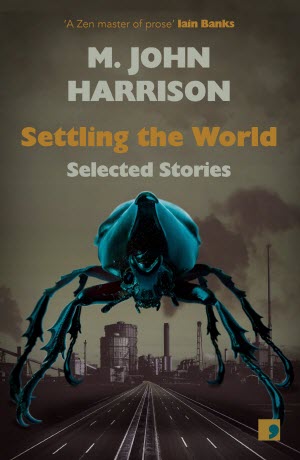 In her forward to this new collection by M. John Harrison, Jennifer Hodgson says, “Harrison is always telling us the same story.” It is an odd thing to say when you are trying to persuade people to read a book, but in a way it is true. In part that’s because Harrison, like many writers, uses short fiction as a test bed for longer works. It is a bit like how an artist will do character sketches before committing to a massive piece on canvas. But also Harrison has particular interests.

Actually I think that there are two archetypical Harrison stories. In one the central character is vaguely aware that some other world exists just out of reach. They spend much of the story longing to find it, but never do. The second type sees the other world invade ours in some way. Humans desperately try to understand it, but fail dismally.

Those stories can be told in a wide variety of different ways, but they are recognisable. Perhaps the most famous example of the first type is, “A Young Man’s Journey to Viriconium”, which features in this collection, but you see it elsewhere too. “Cicisbeo”, also in the book, features a man who becomes obsessed with digging a tunnel into another world through the loft of his house.

The title story of the book, “Settling the World”, tells of how God, who happens to be a giant beetle, has returned to Earth. One of the things he has done is build a massive, 20-lane motorway which emerges from the sea at Southend and runs north. By day nothing can be seen on it, but at night giant road trains roll north towards the factories of Mordor Birmingham. Oxlade, a British secret service operative, is sent to investigate, and meets his old Communist opposite number in Southend on a similar mission.

So why, exactly, is there a new M. John Harrison collection? If you want a best of, then you might prefer to get Things that Never Happen, which I reviewed for Emerald City. That has more stories, and a small amount of overlap with Settling the World. However, Harrison has written a lot more in the intervening years. Also, 2020 marks 50 years of continuous publication for Harrison. The earliest story in this book was first published in 1971, and there is a 2020 story to bookend it. That is an anniversary that is definitely worth marking.

Contrary to possible expectation, the stories in Settling the World are not arranged in chronological order. Quite what obtuse theories inform the sequence of the stories is not obvious, but I understand that if you make a word cloud from the book you will see patterns in those clouds. Assembled in the correct way, they will form a route from our world into somewhere else. Viriconium! Getting there is not easy, but if you want it enough then one day you will walk through. Government men in unmarked vans will come and clear your house. Your neighbours will not be able to remember whether you died, or just moved away. Or your name.