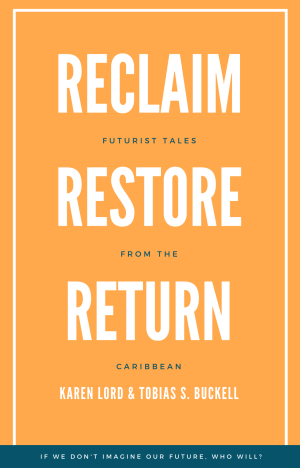 One of the events that I would love to go to, but probably never will, is the Bocas Lit Fest. It is the Caribbean’s premier literary event, taking place each year in Port of Spain, Trinidad. This year it was virtual, but I didn’t find out until too late and anyway I suspect there would have been time zone issues. There is a recording available on YouTube, but it is 10.5-hours long so it will take a bit of effort to find the panels of interest.

Panels of interest, you ask? Why yes, there are two on science fiction, kicking off their Future Friday programme. See here. Because this is a proper literary festival, it doesn’t turn its nose up at the likes of Nalo Hopkinson and Karen Lord just because of what they write.

That, however, is not what I want to talk about. Because this year Bocas did more than showcase science fiction, it published an anthology. Reclaim, Restore, Return was produced in collaboration with the Caribbean Futures Institute, and you can download the ebook for free here.

The book is edited by Karen Lord and Tobias Buckell, and it features the usual big names in Caribbean SF, plus some new folks I was not aware of. There are six stories altogether, plus a poem and an introduction by Lord. The general theme of the book is a positive future for the Caribbean, and that’s a challenging thing to do given the threats posed by sea level rise, an increase in hurricanes, the loss of tourist revenue due to COVID-19 and so on. Nevertheless, the team does a fine job.

I was particularly struck by how many of the stories featured queer characters of various sorts. Hopkinson’s story, “Repatriation”, features a mindboggling scientific idea for rebuilding reefs. But I think my favourite was the Lord/Buckell collaboration, “The Mighty Slinger”. It uses near-future settlement of the solar system as a metaphor, so that the wrecked homeland the characters long for is planet Earth. It centres on a Calypso band with a political message, with echoes of both Bob Marley and Jean Michel Jarre. On the literary side there are nods to The Forever War and Al Reynolds’ Chasm City. I will definitely include it next time I get to do a Music in Science Fiction panel at a convention.

Did I mention that the book is free? Go ye forth and download.