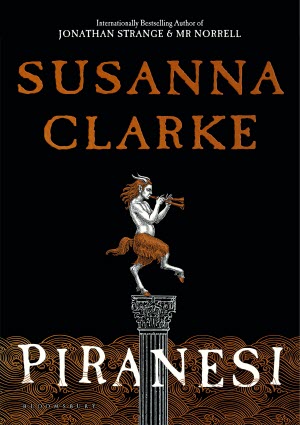 In the beginning was the world, and the world was the House: vast, halls without end, and on three levels. The lower level was the domain of the sea, prone to violent tides that could flood the upper levels, but also full of fish, the only source of food. The upper level was the domain of birds and clouds, the source of rain, reachable only by dangerous climbs. In the middle level there lived a man. We shall call him Piranesi, though he is sure that isn’t really his name, it is just the name that The Other calls him.

There are, in total, fifteen inhabitants of the house. There may be more, but Piranesi has not travelled far enough to find them. Thirteen of them are dead. Piranesi has found their remains and cared for them, placing their bones where the tides cannot, under normal circumstances, reach them. Two are alive. One is the person we know as Piranesi, and one is the person he calls The Other, though that is probably not his real name.

The Other is a mystery. He only appears two days a week. He wears different clothes each time. He brings Piranesi gifts such as fishing nets, matches to light fires with which to cook fish soup, plastic bowls in which to catch rainwater to drink. Piranesi does not question this. He is in awe of The Other, who is searching for Great and Secret Knowledge that he believes can be found in the House. But we, dear reader, we are made of more suspicious stuff. We suspect that Piranesi’s world might not be as all-encompassing as he thinks it is.

Of course if we happen to know who Giovanni Battista Piranesi was, and what he is famous for, then we might have some idea of what is going on here, but if we don’t want any spoilers we should probably resist the temptation to rush to Google before finishing the book.

It has taken many years for Susanna Clarke to write a second novel. She hasn’t been well, and I for one am delighted that she is finally feeling creative again. As you can see, Piranesi is not a sequel to Jonathan Strange and Mr Norrell, and yet it is of a sort, because it continues the story of English Magic.

Jonathan Strange is, in a way, a man of the new world. He is modern and adventurous and business-like, much to the distress of the more staid and secretive Norrell. But both of them dabble in Magic that is of the old world, of the Fay and the Raven King. Around them, a new magic has been growing, and Giovanni Battista Piranesi was, in a way, one of its first practitioners. This is the magic of the Enlightenment, based not in Celtic or Saxon myth, but in the Classical world of Greece and Rome.

Piranesi is set in the second half of the 20th Century. The great wars are over, and the Age of Aquarius has dawned. Magic once again seems possible if you consume enough interesting substances. But to perform it you have to understand the past. You have to have read Robert Graves, Sir James George Frazer, Aldous Huxley and Colin Wilson. If Piranesi reminds me of anything, it is of John Fowles’ The Magus.

It should also have reminded me of something else, but it is a very long time since I read any Narnia books. I shall therefore simply recommend that you read Elizabeth Hopkinson’s review, which is very enlightening.

All of which is to say that Susanna Clarke’s new book is exactly as erudite as we might have expected. It is also fascinating, and gorgeously written. I expect to see it on a lot of award shortlists next year.

By the way, if you are interested in learning more about Giovanni Battista Piranesi, and how his work has influenced people and things as varied as Escher, Poe, Dumas, Fritz Lang, Peter Jackson, Dungeons & Dragons and Judge Dredd’s Megacity One, check this out.