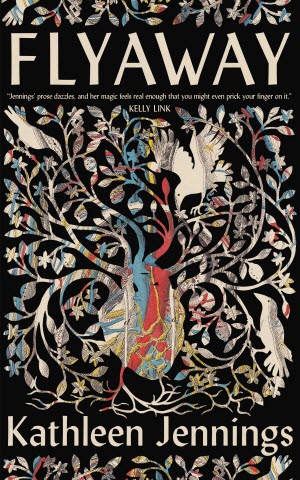 I’ve been familiar with Kathleen Jennings’ art for some time, but only vaguely aware that she writes as well. That’s all changed now. I think she’s done some short fiction, but Flyaway is her first book-length publication, and it is incredibly assured.

If I had to categorise the book, I’d say that it was Australian rural fantasy. It is set in a small, country town, and while strange things do happen, they happen in a way that is very Australian. I didn’t see much of the country while I lived out there, but I can certainly recognise what Jennings is doing here.

The central character is Bettina Scott. Some years ago her father and brothers disappeared. But that’s what men do, right? They are wastrels. They are liable to just up and leave one day. Bettina has devoted herself to supporting her mother, who has pretensions to being Quality. That has rather cut her off from the rest of the community. After all, Mother wouldn’t want her mixing with riff-raff. Bettina is expected to be a proper lady and not do anything disgraceful.

Then, one day, Bettina finds a note in her letterbox. It is addressed simply to “Tink”, her childhood nickname. It sounds like one of her brothers is trying to get in touch with her. Mother would not approve, but Bettina’s curiosity gets the better of her. She ends up teaming up with two childhood friends, Gary and Trish, and going in search of whoever left that note. In the process she finds out more about her town, and about herself, than she probably wanted to know.

That’s it. That’s the plot. But it is beautifully told, with the revelations doled out carefully over the course of the tale. And it is so very Australian. Also it is a novella, so there wasn’t going to be a lot of plot.

The cover is, of course, by the author.

I will certainly be looking out for whatever Jennings does next.