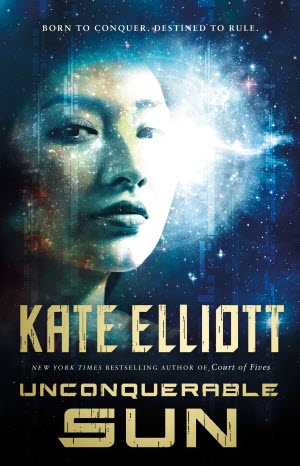 So, a book that is basically a gender-swapped Alexander the Great Space Opera. Do you think that might appeal to someone who writes Amazons in Space stories? If you do then you would be entirely correct. To quote KJ Charles’ legendary comment about The Green Man’s Heir, it is so far up my street that it could be my house.

The danger with such a thing, of course, is that it might not be what I expect. I did wonder whether I would sit there taking notes about bits of historical nonsense that threw me out of the story. I need not have worried. Kate Elliott knows what she is doing. Unconquerable Sun is far enough (by several millennia and innumerable light years) from the source material for such things not to matter. The book is inspired by Alexander, but does not pretend to be a re-run of history.

Let’s see what it does take from history first. The Republic of Chaonia is a small interstellar state which, despite its name is ruled over by a Queen-Marshal. It is bordered by two much larger states, the Phene Empire and the Yele League. All of these states are fragments of what was a much larger galactic empire which fractured after the collapse of parts of the beacon network, the wormhole system that permits rapid interstellar travel. Although the inhabitants of these systems are apparently descended from humans, a great deal of genetic engineering has been done by the Phene and, for reasons best known to themselves, they now have four arms.

The Phene, then, are the Persians. They are fabulously rich and scientifically advanced. They love art. But they are perhaps too slow moving to cope with their smaller, more agile rivals. The Yele are the Delian League, an alliance of Greek city states cobbled together by the Athenians to keep the Persians at bay after the invasion by Xerxes had been decisively repulsed. As if to reinforce the point, a Chaonian character is at one point given to exclaim, “Never trust a Yele bearing gifts.”

But it isn’t that simple. The Phene have a religion reminiscent of Byzantium, including churches called Basilica. And they speak Latin, or at least some of them do. At one point a minor Phene character exclaims, “Alea iacta est.” I look forward to the unconquerable Sun pitting her military brains against a Phene general called Belisarius.

As for the Chaonians, their historical analogue occupied a part of Greece known as Epirus. It is in the north-west of the country, just south of modern Albania. I suspect that Elliott may have chosen it in order to avoid the troublesome name, Macedonia. The Chaonians don’t have a great military history, but their near neighbours in Epirus, the Molossians, once waged war on the Roman Republic. They were led by a chap called King Pyrrhus, who gave his name to the concept of a military victory so costly for your own side that it was perhaps not worth winning. Alexander’s mother, Olympias, was the daughter of a Molossian king.

In any case this is all moot because we are in a space opera. The founding queen-marshal of Chaonia was called Inanna and she adopted an eight-pointed star as her badge. Did I punch the air when I read that? Of course I did.

The story opens with Sun still a young woman. She is the only heir of queen-marshal Eirene. However, her father, Prince João, comes from a small and mysterious people known as Gatoi who are genetically engineered to be superior warriors. João is a Portuguese name, and gato means cat in both Spanish and Portuguese. Because Sun is not pure-blood Chaonian, the various noble houses keep plotting to supplant her with one of their own, and this forms the backdrop to much of the plot.

Like Alexander, Sun has a group of loyal Companions whom she has known through her childhood. Unlike Alexander, these are not all warriors. And they all have cee-cees – companion’s companions – who also have useful abilities. James is an expert hacker, and his cee-cee, Isis, owns a pet pteranodon that she has trained as a scout. The Handsome Alika is what D&D players will immediately recognise as a Bard, and whose job on the team is to mastermind Sun’s social media presence, particularly though a popular talent show called Idol Faire. His cee-cee, Candace, is a pilot and also an expert with war fans (the Japanese practice of tessenjutsu, as made famous in Avatar: the Last Airbender).

Because conflict is the seed of story, much of the plot also revolves around the introduction of a new Companion. Persephone Lee is the daughter of the powerful House Lee, which runs the Chaonian secret service. Perse’s elder sister, Ereshkigal, is a celebrated war hero who gave her life for the Republic. Her aunt, Moira, is a skilled political operator and a former Companion of the queen-marshal. Perse is referred to in chapter heading as “the Wily Persephone”, but it soon becomes clear that this reflects her self-image more than her actual capacity for cunning. She makes a charming foil for the ridiculously competent Sun.

Naturally, because of the setting, space battles also play a major part in the narrative. This is military science fiction, thought I doubt that any of the dudebros who love such things would accept it as such given the prevalence of women in the narrative.

There’s also a lot of court politics, and a certain amount of teenage angst, especially from Persephone. The world-building is mainly political and military, but every so often we get something charming.

The landscape beyond is grass and scrub. A herd of styracosaurus graze in the distance, mixed with a herd of dwarf diplodocus and several handsome nodosaur of the kind ridden by bold knights in the days of the Celestial Empire.

Yep, that original human galactic empire? Probably run by the Chinese. Everyone seems to eat Asian food. But fear not, white bros, the classic tunes that Alika plays are written by British and American artists.

Because this is space opera, we expect something off the wall as well. We get that in the form of a group of Phene agents called Riders. They are Phene who are born with two personalities, one of whom has a secondary face on the back of the head. All of these secondary personalities are in constant telepathic contact with each other, which is very useful in a military context where combat can be spread across multiple star systems. Also decidedly creepy.

There is an awful lot to this book, in fact a lot more than I have let on, and it is very much part 1 of a series. Sun isn’t even queen-marshal by the end of it. I have no complaints on that score. This is a 500+ page book that I devoured in a day and a half because I couldn’t put it down.