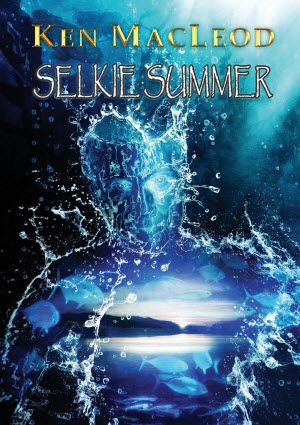 This is another one of the novellas being published by Ian Whates’ NewCon Press. It is something of a departure for Ken MacLeod. He’s mostly known for writing highly political science fiction. What is he doing writing a love story about selkies?

We can start with the biography. MacLeod was born on Stornoway in the Western Isles. He’s very familiar with island life, and the small town atmosphere that such a closed and isolated environment engenders. Having spent quite a bit of time on Scilly, I recognise much of what he’s writing about.

Next, this is an environment story. On the face of it, the world of Selkie Summer is something like that of Juliet McKenna’s Green Man books. The existence of supernatural beings such as selkies and kelpies is a matter of fact. Except for McKenna it is a little-known secret, whereas for MacLeod it is public knowledge. These non-human creatures don’t only exist, they can talk to us, and sometimes vent their feelings.

For example, the kelpies have put paid to the idea of hydroelectric power messing up their beloved rivers. They weren’t going to stand for it. And this the electricity company that in our world is know as “The Hydro” is known to the cast of Selkie Summer as “The Nuclear”. (MacLeod as a thing about nuclear power being a solution to environmental issues, as readers of The Sky Road will remember.)

As for the selkies, well, they live in the sea, and that means that just like whales they get upset about the sound pollution produced by human shipping. In the case of those living off the west coast of Scotland, that includes the activities of the British nuclear submarine fleet based at Faslane down near Glasgow. They also get upset about bridges, which is why the Skye road bridge doesn’t exist in the world of the story and anyone wishing to visit the island has to do so the traditional way by ferry.

All this, however, is background. The main plot concerns young Siobhan Ross, a student from Glasgow University who takes a summer job as a cleaner in a guest house on Skye. Her workplace has an entertaining gang of supporting characters. There is Mairi the waitress who is into Death Metal, Gordon the chef who is the only gay on the island, and Mrs McIntyre the owner who is a formidable if apparently somewhat superstitious old dear. I rather wish that story had been longer and that Mairi and Gordon had been given more to do.

While on Skye, Siobhan meets and falls in love with a handsome selkie called Cal who works on the ferry. All of the islanders know he’s a selkie, and most of them warn her off him (though Mairi and Gordon are both mildly jealous). Siobhan, however, seems to have an affinity for selkies, which draws her deeper into their society, and ends up getting her in rather a lot of trouble.

Along the way, MacLeod can’t resist the opportunity to turn the story into a bit of a political thriller. It wouldn’t be a proper Ken MacLeod story otherwise.

However, the thing that kept poking at my consciousness while I was reading Selkie Summer is the connection to another story of an isolated coastal community that has contacts with an aquatic race of beings.

In “The Shadow Over Innsmouth” HP Lovecraft writes about how Robert Olmstead travels to a decrepit New England town that is close to the home of the bug-eyed fishmen known as Deep Ones. Like Siobhan Ross, Olmstead discovers that he has a particular affinity for sea-dwelling creatures. Everything else about the two stories goes in very different directions. I would therefore suggest that, though there is absolutely no mention of Cthulhu and his tentacled pals in Selkie Summer, the story is nevertheless part of the current wave of repurposing Lovecraftian ideas for the greater good.

All this in one little novella? Yes.