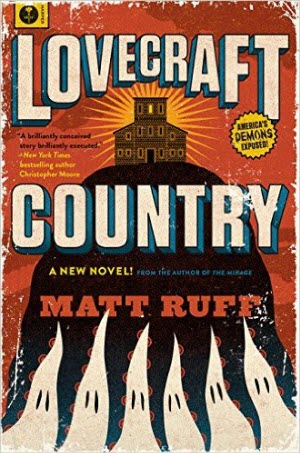 As I write this issue, the TV series is only two episodes old. It seems to be going down very well, despite the obvious drawback that trying to depict Unspeakable Horror on a TV screen is going to end up looking silly. But inevitably few of the people commenting on it (including some writing reviews in paying venues) have any idea that it is based on a novel.

Matt Ruff’s book of the same name came out in 2016 and was on my Hugo ballot for that year. From what I have seen on Twitter, Ruff has done the sensible thing and turned his creation over the Misha Green to do with what she will. She appears to have changed some names (and I regret the loss of the Dorothy Dandridge reference), and dropped Caleb entirely, but book to screen always involves changes. Green and Ruff seem to be on good terms, which is good to know.

I suspect that there might be a bit of surprise in some quarters when people discover that the original book was written by a white guy. White people have certainly tried to cash in on parts of the story. The movie Green Book has come in for a fair amount of criticism from Black Americans. Lovecraft Country did it first, and did it better.

However, the original credit should not go to Misha Green, or to Matt Ruff. At NASFiC I was on a panel with Eileen Gunn who edited one of the first online fiction magazines, The Infinite Matrix. At some point (I’m not sure if we were live at the time) Gunn commented that Ruff got the idea for Lovecraft Country from an essay in The Infinite Matrix. It was called “Shame”, and it was written by a Black woman called Pam Noles. It doesn’t mention Lovecraft, but it is absolutely about the relationship of Black people with the whiteness of science fiction. You can read it here.

Ruff gets a credit on the TV series. Noles, of course, does not. But both of their contributions are in danger of being forgotten.

History lesson over. Here is my original review of Matt’s book. I note that it was written 4 years ago when life for Black people in the USA was quite a bit safer than it is now.

There are some books that sound like an accident waiting to happen. A Cthulhu Mythos book told from the point of view of a black family from Chicago, written by a white man, seems very much in that vein. And yet it was written by Matt Ruff, who has made a career of tackling very difficult subjects. His 9/11 book, The Mirage, for example, is seen mostly from a Muslim point of view. Lavie Tidhar’s Osama might have been a somewhat better book — it certainly won more awards — but I can’t fault Matt for bravery and for trying. At a time when Lionel Shriver is making an idiot of herself whining about having to worry about cultural appropriation, Matt shows just what a good job you can do if you put your mind to it.

Well, at least I think he does. I too am, after all, a white person from a nominally Christian country. My knowledge of Islamic culture, and of African-American culture, is doubtless far more limited than Matt’s because he has done the research here and I haven’t. My research has been limited to trying to find out what actual African-Americans think of Lovecraft Country. Tor.com very sensibly asked one to write their review, and she loved the book. Charlie Jane Anders has also praised the book, and she has much more day-to-day contact with African-Americans than I do (and I expect her to have asked them, because she’s good like that). Besides, the book has been out for a while, and if it was problematic I am pretty sure that the Internet would have fallen on Matt’s head by now.

But enough of the skirting around the subject, what is the book actually about?

Well, Lovecraft Country is a tale of the Turner family who live in Chicago in the 1950s. We first meet Atticus, recently demobbed from service in Korea. Later we encounter his father, Montrose; his uncle George who runs a travel business catering to middle class black people who want to be able to travel the USA in safety; Aunt Hippolyta who wanted to be an astronomer; and cousin Horace who is a budding comics creator. We also meet two very resourceful sisters, Letitia and Ruby Dandridge. Janelle Monáe fans will know where that last name comes from.

Blood, however, is important stuff in magic. Just as one drop of black blood can mark someone out as a lesser being in the eyes of racist Americans, so the considerably more than one drop of Braithwhite blood that the Turners possess marks them out as persons of importance, and even power. As far as Braithwhite’s white descendants are concerned, there is only one thing to do:

Montrose nodded: “He’s going to summon up one of the Elder Klansmen. A host of shiggoths too, probably. And you’re the sacrifice.”

“I’m glad you are feeling good enough to joke about it, Pop.”

Without giving too much away, Atticus manages to escape the horrible fate that Samuel Braithwhite had planned for him. However, Braithwhite’s son, Caleb, proves a much more wily and resourceful adversary. The book proceeds through a succession of short narratives in which various members of the Turner clan have encounters with various cultists and eldritch horrors. The whole thing comes over as a re-telling of a Call of Cthulhu campaign in which the Turners and their friends are the player characters.

In a review in the LA Review of Books Justin Bortnick complains that Lovecraft Country has none of the feel of eldritch horror that a true Cthulhu Mythos tale should have. But Bortnick has completely missed the point. Firstly, this being a Call of Cthulhu campaign, the Turners and Dandridges are able to bring their science fiction fan knowledge to bear on the problems that they face. And they are science fiction fans. Atticus and Montrose are voracious readers. Hippolyta wants to be an astronomer. And Horace is writing a comic series about a kick ass space heroine called Orithyia Blue. One of the things you learn when playing Call of Cthulhu is that the whole set-up is inherently ridiculous.

Much more importantly, however, there is very much a sense of horror that pervades the book. That horror is provided, not by tentacled beings from beyond the stars, but by the very real racism that our heroes face. Those of us who are decent, empathetic people are already horrified enough by the victimization that black people face in America today. Without any disrespect to the Black Lives Matter movement, which is extremely important, it is an eye opener to discover just how much worse things were back then.

Here Matt’s research skills come to the fore (or possibly those of his wife, Lisa, who is a Queen of the Internet). Lovecraft Country is laced through with example after example of the horrors faced by black families in 1950s America. It is mindboggling. I have some idea of what they had to go through because as a trans person I have experienced a world in which people can fire you from jobs, refuse you access to hotels, shops, housing and hospitals, and so on, just because of who you are. But I certainly haven’t had to face the daily threat of (police-sanctioned) violence that the heroes of Lovecaft Country have to put up with.

Talking of trans issues, there’s a section of the book in which Caleb Braithwhite attempts to recruit Ruby Dandridge to his cause by providing her with a magic potion that turns her into a white woman. Ruby calls herself Hillary while so disguised. Here’s a brief extract in which other white people have been talking to Hillary about their disdain for black people.

It was nothing Ruby hadn’t heard, or overheard, a million times before. But there was a difference between having people talk about you, or at you, and having them talk to you, believing you were one of them and expecting you to think as they did. It took a significant effort on Hillary’s part not to give herself away, and to extricate herself from the conversation without telling the one sort of lie Ruby considered unpardonable—silence, in the face of some things, being damning enough.

This is very much what it is like being a trans woman prior to transition. Some men say the most appalling things about women when they think we are not listening, and they expect all other men to agree with them (and suspect you of being gay if you don’t). Well done Matt on thinking of highlighting that.

There are other ways in which Matt throws research into the book without ever seeming to infodump. For example, the Braithwhites live in a part of Massachusetts called Devon County. The original settlers came from a small town in North Devon called Bideford. Matt never explains that this is the town that the Roanoke colonists came from. He just assumes that if we know we’ll smile knowingly, which of course I did.

Then there are lovely exchanges like this one between Caleb and Ruby:

“You want to be the Al Capone of warlocks.”

“More like the Frank Costello, if we’re going with a Mafia analogy,” Braithwhite said.

Caleb Braithwhite is, in some ways, the most fascinating character in the book. Unlike his father, and most of the other occultists in the book, he’s not an out-and-out racist. He doesn’t want a return to slavery. He thinks that black people can be quite useful as employees. Provided, of course, that they know their place and are capable of taking orders from their betters. He probably thinks of himself as a good ally.

Yes, Caleb Braithwhite is the character that Matt has put in there for white people to identify with if they can’t stomach the thought of identifying with a black person. His ultimate fate is therefore quite important to how successful the book is. No spoilers, and anyway it isn’t my place to judge. But, like I said, the Internet has not yet fallen on Matt’s head, so I think he’s got it right.