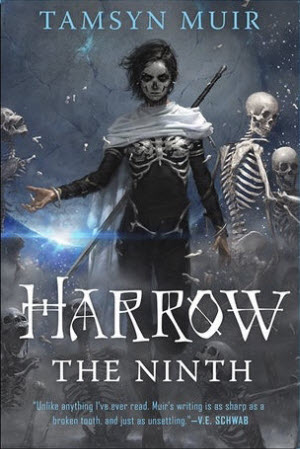 It appears that the Emperor’s plan has worked. Of the eight necromancers who came to Canaan House, two have succeeded in ascending to Lyctorhood. They are Ianthe Tridentarius, and of course Harrowhark Nonagesimus, who is the central character of this book. Now the two young Lyctors are ready to join their remaining elder colleagues in the great war that the Emperor is waging against, well, something. They have a lot to learn before being plunged into battle.

Unfortunately something has gone wrong. In Harrow’s case the Lyctor process appears to have been incomplete. Part of her is missing. What’s more, we see regular flashbacks to her time in training at Canaan House. Having read Gideon the Ninth, we know those flashbacks are false memories. The people who die, and the way in which they die, are very different. And someone very important is missing.

The mystery of what has gone wrong with Harrow’s mind, and why, is one of the central themes of the book. Another is the worldbuilding. In Gideon, save for some inter-planetary travel and a few shuttles, we saw little of the outside world. It was easy to pretend that these books were fantasies about necromancers and swordsmen. In Harrow the Ninth we leave the Solar System and get to see more of the audacious universe that Tamsyn Muir has created. Simply put, these books are a space opera in which the primary technology is necromancy.

How does that work, exactly? Well we have already seen Harrow in action, creating servants from fragments of bone. But that’s all very fantasy. What about space travel? Well, there has to be a means of faster-than-light travel, and in Muir’s universe that is achieved by dropping your craft into The River, that vast stream of nothing in which dead souls go to wander. Naturally you are at extreme danger of attack by angry ghosts, so you need good necromantic protection, but once there you can travel very quickly indeed.

Mad? Yes, of course it is. The whole series is mad. Harrow is mad, which is unsurprising given the awful upbringing that she had. And a few other people might well be mad as well.

I mentioned earlier that Harrow and Ianthe get to join the remaining members of the Lyctor corps. Several of them are dead, but three remain and like, the Emperor, Necrolord Prime, King of the Nine Renewals, Giver of Resurrection, His Celestial Kindness, King Undying, God and so on and so forth (also known as John), they have been alive for ten thousand years.

Imagine, if you will, a superhero team. Say, the Avengers. They have come together to fight evil, or at least an extra-terrestrial threat. They have been doing this for some time, and over the years their relationships with each other have undergone changes. They have fallen out, fought against each other, had affairs, got married, broken up, left the team in a huff and so on.

The Avengers, however have only been going for around 50 years (subjective time, far less in comic time). Imagine what sort of conflicts might arise in a superhero team that has been around for ten thousand years, whose members cannot die, and all of whom owe their undyingness to their leader. What grudges might they hold against each other? What patient and convoluted plans for revenge might they be hatching?

You may not be surprised that many of the chapters of this book are dated in the form, “X Months before the Emperor is Murdered.” You may need reminding that if God dies, so does the Sun, and all nine planets that orbit it.

Oh, and there is the small matter of the war. There are monsters in the darkness of space. Some of them are capable of laying waste to planets, eating planets if you will. They have servants, which are known as Heralds. Of course they are. They don’t have surfboards, though.

I think that mostly covers it, though there are things I have left out because you need to discover them for yourselves. By the end of the book you will know a lot more about the deep history of Muir’s universe, and the more recent history of one Gideon Nav. There is one more book to come, and it will be very different again. It will probably be even more space opera-like than this one, but there will also be lots of bones.

Which leaves us, of course, with the elephant in the room. One the one hand, Gideon the Ninth was a sort of lesbian love story. On the other, the relationship between Gideon and Harrow was so horribly dysfunctional that it would take an entire legion of therapists to sort out. Instead Muir has dumped poor Harrow in the company of a small bunch of people who might be even less sane than she is. And threatened her with imminent, hideous death.

The point is that just about everyone in this book is a deeply damaged person. They are going to do awful things to each other. Presumably we are to hope for redemption and resolution by the end of book 3. That won’t be easy to achieve. But there is one small ray of hope on the horizon. If I might be permitted one small spoiler, my favourite character from book 1, Camilla Hect, is still alive and looks like playing a major role in book 3.