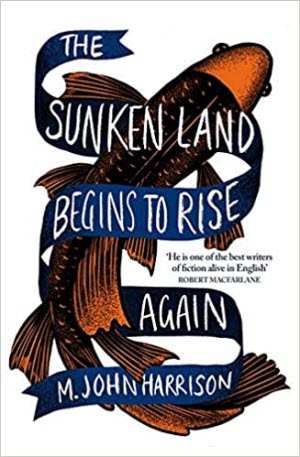 The term ‘Matter of Britain’ is usually applied to Arthurian literature. I suspect that M John Harrison would be horrified if he thought I had accused him of writing an Arthurian novel, and yet his latest novel, The Sunken Land Begins to Rise Again, is very much about the matter of Britain.

Fortunately there is a connection. The land of Lyonesse is a sunken kingdom located between Cornwall and the Isles of Scilly. It features in the legend of Tristan and Iseult. Practically speaking, it is probably a memory of the fact that Scilly was mostly a single island as recently as Roman times, and that sea level rise has fractured it into many islands surrounding a shallow lagoon that can still be walked across at the lowest of tides. Fictionally it is much more mysterious. Here’s Tennyson in Idylls of the King.

Then rose the King and moved his host by night
And ever pushed Sir Mordred, league by league,
Back to the sunset bound of Lyonesse—
A land of old upheaven from the abyss
By fire, to sink into the abyss again;
Where fragments of forgotten peoples dwelt,
And the long mountains ended in a coast
Of ever-shifting sand, and far away
The phantom circle of a moaning sea.

Harrison takes his title from an essay by Charles Kingsley. He was also the author of The Water-Babies, a Victorian children’s novel which has a prominent role in Harrison’s book. In it a young chimney sweep called Tom falls into a river and is transformed into a ‘water-baby’, an underwater creature that may, through correct moral behaviour, earn the right to become human once more.

Kingsley intended to book to be a warning about the evils of child labour, and poverty in general. He also saw it as a defence of Darwin. However, it is what one might call a ‘book of its time’. It is chock full of racism of various sorts, and its understanding of evolution seems to come more from the popular press than science. Harrison, I think, uses it in part to represent Victorian Values, and the sort of obsession with human devolution that so poisons everything that Lovercraft wrote.

More of this later, but first I should say a bit about the story. There are two main characters, the first of whom is known primarily as Shaw, his last name. Late on in the book we discover that his first name might be Lee, but I don’t think he ever uses it. His mother, who is in a care home suffering from dementia, uses a succession of first names for him, all of which he angrily rejects as not being correct.

Shaw lives in South-West London in the region of Barnes and Mortlake. This is near where Harrison used to live. I once visited his home there to do an interview. Don’t be fooled by the references to White Hart Lane. This is not Tottenham. There is a road with the same name in Barnes running north from the A205 to the Thames.

Mort Lake, of course, would be Death Lake in an Arthurian novel.

As the novel opens, Shaw is having an on-off affair with a woman called Victoria. He is convinced that her last name is Nyman, but in the chapters that are from her viewpoint it is given as Norman. That disconnect is typical of their relationship. Both of them are so self-absorbed that they are unable to talk to each other about themselves, and consequently know nothing about each other. This makes them fairly typical Harrison characters.

Soon after the start of the book, Victoria leaves London for Shropshire where she has inherited a house in a small town from her deceased mother. Given its location on the Severn Gorge, the town sounds very much like Ironbridge, but Harrison never identifies it as such. He certainly knows the area as, when he left London, he took up residence somewhere in the Welsh Marches. I’ve not visited him and haven’t asked for an address.

I suspect that the town in the book is a construct intended to be like a Shropshire town but not a specific location. Certainly I can’t find a reference to a Geoffrey de Lacy who supposedly built the town’s castle. This surprised me because pretty much every Norman family had a Geoffrey somewhere in the family tree. The de Lacys were Marcher Lords, but their seat of power was further north around Ludlow than in the Severn Gorge.

Because Sandy Denny’s voice is unforgettable, I then wondered if there was any connection, but it turns out the that Fairport Convention song is actually about Bruce Lacey, who surely deserves a place in an M John Harrison novel if anyone does.

Shaw gets a job working for a strange man called Tim whose business appears to be entirely based on selling copies of his conspiracy theory book, Journeys of Our Genes, and running an associated website called The Water House. Tim’s theories revolve around weird ideas about human evolution and possible connections to fish-like beings. How this brings in enough money to pay Shaw a salary, let alone sufficient salary to allow him to rent the small room in London where he lives, is never explained. Perhaps that’s the point, because who knows where the money comes from to fund much of the conspiracy theory stuff that goes on online.

Meanwhile Victoria discovers that the town she has moved to has an Innsmouth-like vibe to it. Everyone seems to know everyone else, and we readers can see that there is a definite connection between these inbred people and the fish-people conspiracies being peddled by Tim. Neither Shaw nor Victoria ever summons up enough energy to try to understand what is going on. Victoria does email Shaw with regular messages about how strange her new life is becoming, but he never reads them.

All of this proceeds at a fairly glacial pace. This is not Light. There are no cosmic mysteries, one-shot-cultivar street gangs or white cat star fighters. It is Britain, and therefore just as damp, bleak and uninteresting as you might expect. Except for the possibility of fishmen. On the other hand, it is a Harrison novel, so you get descriptive passages like this:

Rain, blustering in from the Chiswick shore, had forced him to turn up his collar. Now it varnished the thin headstones, swirling into the north-east corner of the graveyard where a few trees clustered against the wall of the old Barnes fever hospital. His jeans were soaked.

Occasionally there are really specific references such as this:

…it had charged the air in the downstairs rooms so that her cushions and covers, though they remained dull and even a little grubby-looking, took on the pure painterly values and eerie depth of the objects on a Virago book cover in 1982.

My first thought was that Harrison was referring to work by Judith Clute, but her covers were for The Women’s Press and later in the 1980s. I think this is a reference to the cover of The Tidy House by Carolyn Steedman, which won the Fawcett Society Prize in 1983. Harrison’s book is full of references to various works of art.

Harrison is one of those writers who carries a notebook with him everywhere and jots down observations and snatches of conversation that he thinks might be useful one day. Here Shaw and Tim are on a train from London to Wolverhampton. Shaw overhears a couple talking in the seat behind him.

With a little inadvertent sigh of pleasure the woman said, ‘There must be some meaning to these clouds.’

I’m pretty sure that was taken from life. It also fits perfectly in with the conspiracy theory theme of the novel.

Have we got anywhere here? Are we any closer to understanding this book? Or are we, like Tim, writing down snippets of nonsense and extrapolating fantastical connections between them? Let’s try some theories for size.

Firstly this book is very much concerned with water. That’s hardly surprising. Water has always been a fact of life in the UK, but it is becoming much more so. One of the effects of climate change is an increase in seasonal flooding. Back in Arthurian times the Summer Country, or Somerset as it is now known, disappeared under the waves every winter, only to re-appear again in spring. These days the Isle of Avalon is finding itself surrounded by water again when the winter rains come.

A much stronger theme, however, is Brexit. Harrison admitted as much in an interview that he did with Gary Wolfe for The Coode Street Podcast a couple of weeks ago. Like Shaw and Victoria, many British people have spent the last few years sleepwalking through a world in which goggle-eyed, rubber-lipped fishmen (not mentioning Farage or Gove by name), backed up by professional conspiracy theorists with no obvious means of financial support, and inspired by crazed fanatics like Cummings, have slowly but surely taken over the country. We didn’t see it coming, and now it is too late. We have no option but to be submerged by the waves.