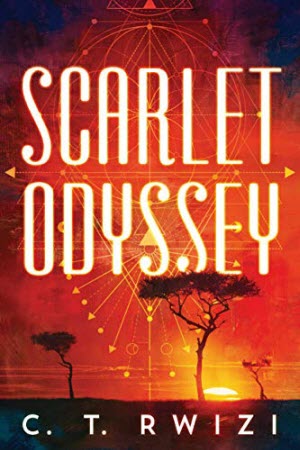 In a fantasy world, a young boy discovers that he has special powers, and that he may be destined to save his people. There are hints that he will play a vital part in world-shattering affairs. This is volume one. So far so predictable, right? Well not quite.

Scarlet Odyssey is a debut noel by CT Rwizi. He grew up in Swaziland and Zimbabwe. He went to college in the USA. And now he is back living in South Africa. This is not your average, white, European fantasy.

The story is set on a different world (two suns) in a society that is very African-influenced. Our hero, Musalodi (Salo to his friends) is from a small tribe who live on the Yerezi Plains. His people have a leopard totem, and their local rivals have a hyena totem. This is sufficient for me to fall in love with the book because leopard people are my people. That, however, is largely irrelevant to your likely enjoyment of it.

Although Salo’s people live a fairly simple life, they do have technology. They also have magic, though that too is very technological. Sorcerers talk about crafting the ‘prose’ of a spell in much the same way as programmers talk about code. Also there are ‘tronic beasts’ – “exotic machine-organic hybrids with metalloid features and mind stones inside their brains” as it says in the book.

Elsewhere in the world, there is more of what we would understand as a city-based civilisation. The great jungle metropolis of Yonte Saire is ruled over by the Saire people, who have an elephant totem and are famed, among other things, as bankers. We also learn of trade with a civilisation across the sea. We learn of rivalry between those who practice moon-based magic, and those who practice sun-based magic.

While we do get thrown headlong into the politics of this world in this volume, the greater global and perhaps even cosmic issues will have to wait until later books. Meanwhile we have our heroes to meet.

Salo’s big problem is that he wants to be a sorcerer, and among his people this is women’s work. He’s gay too, though you might not pick up on the clues in this book. I’m only certain of it because Rwizi has talked about it in some of the publicity for the book. This does not go down well with his father, the Chief, or with his younger half-brothers, or indeed with pretty much everyone in the village. Of course it is inevitable that it becomes necessary for him to use his powers, but it is an interesting backstory for the fantasy hero.

“A man’s strength is not in letters written on a page but in his knowledge of the soil and the rivers and the lakes. It’s in his herd of cattle and the sweat of laboring in the suns; it’s in the arm that wields the spear. Leave books to women; they are creatures of the mind. You are a man and must be a creature of the flesh.”

Salo gets sent on a mission away from home, for his own safety as much as anything else, and along the way he picks up companions. One of them is Ilapara, a Yerezi woman who is a warrior and therefore similarly outcast. Presumably she’ll turn out to be a lesbian. There’s also a fascinating character called Tuksaad who appears to be some sort of magical cyborg made by foreign sorcerers.

One of the things I like a lot about this book is that there is plenty of moral ambiguity. Salo tries hard to be good, but he has no understanding of the wider world and all too often his moral instincts only make things worse. Ilapara would rather an easy life as a bodyguard for some rich idiot, but she reluctantly gets sucked into Salo’s orbit. And then there’s The Maidservant, the evil sorceress who is the proximate cause of Salo’s banishment and who dogs his steps on the journey. Her story is just as interesting as that of Salo.

Which brings me to the title of the book. Sure, Salo goes on a journey, and he does come from the Redlands. He also uses moon magic, which is blood magic. But there is more of Homer to the book than those superficial comparisons. You see, blood magic requires sacrifice. The bigger the sacrifice, the more power you get. Agamemnon learned the hard way that making a huge sacrifice for a huge gain does not always turn out for the best. That same calculus runs all through Scarlet Odyssey, and makes it an interesting book.

My thanks to Rwizi’s agent, Julie Crisp, who thought I might like a copy of this book.