Of Dragons, Feasts and Murders 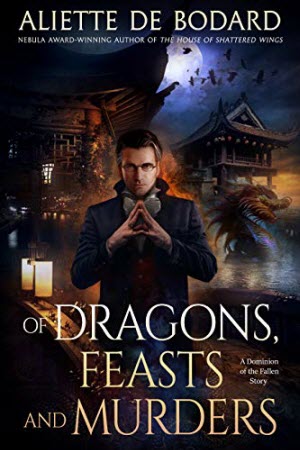 Well, in this book they do. Thaun has invited Asmodeus beneath the waters to celebrate Tet, the Vietnamese New Year, with his dragon family. Unfortunately for Thaun, Second Aunt, or the Empress as she is known to the rest of the underwater kingdom, is not having a good time. There are rumblings of discontent in the Imperial Bureaucracy. Events in the city above have not been kind to those under the water. It has even been suggested that Her Imperial Highness has lost the Mandate of Heaven, meaning that she needs to be deposed for the good of the people. This leads to plotting, and plotting leads to murder.

Asmodeus is bored. Very bored. Until the murder happens. Murders are what Asmodeus likes best.

From here on in Of Dragons, Feasts and Murders is simply a murder mystery. Thaun and Asmodeus need to find out why it happened, and what cunning plot against the Empress the victim was killed to keep secret. It is a novella. There is no need for more plot than that.

Murder mysteries are dependent on two things: the actual mystery, and the characters involved in solving the crime. De Bodard is not Agatha Christie. You won’t find Asmodeus revealing the murderer to a locked room of suspects at the end of the book. He’d rather lock them all in separate rooms and torture them until someone confesses. But you will be very much entertained by the unlikely couple as they unravel the mystery. You’ll probably also learn quite a bit about Vietnamese culture along the way.

There’s not a lot more I can say about the book. It is quite short. Fans of the Dominion of the Fallen books will know exactly what to expect, and De Bodard delivers it expertly and elegantly. You just have to read and enjoy.