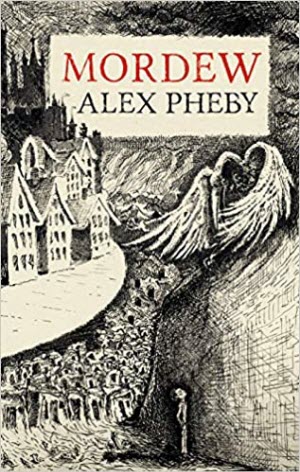 Welcome to the city of Mordew. It is approximately semi-circular in shape. The base is bounded by massive mountains riddled with mines. The arc is formed by the Sea Wall which prevents the city from being flooded. Within the Sea Wall are slums, populated by the city’s poorest, whose streets run with Living Mud in which all sorts of vile creatures may be found/created. Within them is the walled Merchant Quarter, and within that the domain of the aristocracy. Right in the centre, high on the city’s only hill and reachable only via the spiralling, jet black Glass Road, is the Manse of the Master of Mordew, whose sorcerous powers keep the entire city running, and subservient to his whims.

If you think that the geography of Mordew is a little far-fetched, I suggest that you check out the town of Jardim Do Mar on the island of Madeira which I suspect provided Alex Pheby with some inspiration for his fictional creation.

The plot of Mordew centres on Nathan Treeves, a thirteen-year-old boy living in the slums. His father is dying of an infestation of lungworms. His mother has taken to sex work to make ends meet. Nathan helps out as best he can, but there is little a young boy can do to earn money. His best option is to fish valuable creatures out of the Living Mud, which would be much easier if he could only use his peculiar talent, the Spark, which his father has expressly forbidden him from using.

What does the Master want with a crier? Well, a boy’s tears are a precious thing, you can use them in all sorts of ways: in potions, in tinctures, some say the Master uses them like a merchant uses salt – to give flavour to his food – but the truth is that when you weep, part of your soul goes away in the water, part of you, and the more you cry the more of you goes.

Yes, as you will have guessed, Nathan is a very special boy. By the end of Mordew you will have found out just how special. But there is a long way to go before then, and first we must follow a Dickensian tale of his life in the slums. We learn about the gang of street urchins run by the enterprising but cruel Gam Halliday. We learn about Prissy who has taken to a life of crime to save herself from a life in a brothel. We learn about Jerky Joes, who were once twins but whom some mysterious magic combined into a single body before they were born. And we learn about Mr. Padge, the vicious crime lord to whom Gam is beholden and who seems to know rather more about Nathan than one might expect.

All of this takes up roughly the first half of a 500+ page story. It is quite slow. But do please persevere, dear reader, because from then on things speed up exponentially until, by the end, the pace of events is positively breathless.

‘The Master’s house has many rooms, and some of these are kept separate from the others. If there are women, or girls, they must be kept separate because their effluvia can disrupt the magics that order this place, every part having its own function.’

Regular fantasy readers may, I suspect, become a little frustrated. Nathan has very little agency for most of the book. He is manipulated by his parents, by his friends, by the Master, and the Master’s sworn enemy, the Mistress of Malarkoi. It is not by any stretch of the imagination an appropriate coming of age for a thirteen-year-old boy, with the inevitable consequences. Mordew is not a happy book, and most of the people in it are ruthless and manipulative in one way or another.

What child – when surrounded by bullies, taunted and mocked and poked – no matter how weak, does not long for the strength to best their foes, to drive them weeping back to their hovels? What child would not kill their persecutors, if they were able to?

There is, I am fairly sure, a moral message in all of this. That is given away by a massive spoiler that you will find in the cover blurb, and probably the marketing material as well. Far below the Manse there is a vast cavern. In that cavern is a corpse. That corpse appears to provide much of the magical power that sustains the rule of the Master. Because that corpse belongs to someone that the world generally knows as God.

Quite how God came to be dead (murdered?) and His body stuck in a cavern under Mordew is not something we will learn from this book. Mordew is, in the finest fantasy tradition, merely the first book of a trilogy. But if you make it into the second half of the book you will, I think, want to keep reading. For starters there’s that corpse to explain. Then there are some subtle hints that Pheby drops about the location of his world. And finally there is a 100+ page glossary at the end, that you should probably not read before the book, but might read after it, and in which are further revelations about key characters that you will not have fully gleaned from the text.

Alex Pheby is not a fantasy writer. He teaches creative writing at the University of Greenwich and his previous novels include a study of schizophrenia and a story about the daughter of James Joyce. Mordew is published by Galley Beggar Press who are currently most famous for the Booker shortlisted Ducks, Newburyport. However, they are run by Sam Jordison whom I first met at a Clarke Award ceremony and who clearly knows his SF&F and well as his LitFic. Sam used to write reviews of LitFic books that might be of interest to SF&F readers for Salon Futura back when it was a professional venue.

Mordew, then, is not your usual fantasy fare. But it is a very interesting first step on what promises to be a fascinating trilogy. Sam kindly sent me this review copy, and I rather hope he’ll send me the subsequent volumes as well because I want to find out What Happens Next.