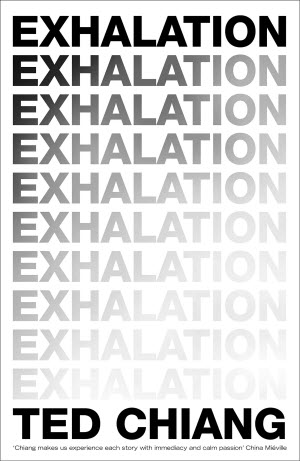 Ted Chiang collections are rare and beautiful things. They are rare, of course, because it can take Chiang a year or more to write a single story. But what stories they are. As such, Exhalation does not disappoint.

Wisely the publishers have chosen to name the collection after Chiang’s most famous story. “Story of Your Life” is, of course, hugely well known in its mutated form as the film, Arrival, but it is not the Chiang story that people remember. I have been in many panels and discussions on science fiction, and when Chiang’s name is mentioned it is almost always in connection with “Exhalation”. The story has clearly hit a nerve with the SF-reading audience. It also won a Hugo.

But then what Chiang story hasn’t? The collection also includes “The Merchant and the Alchemist’s Gate” and “The Lifecycle of Software Objects”, both of which are also Hugo winners and have a bunch of other awards. Two other stories, “Omphalos” and “Anxiety Is the Dizziness of Freedom” are finalists in this year’s Hugos. “The Truth of Fact, the Truth of Feeling” was an unsuccessful finalist back in 2014. That leaves just three stories out of nine that have not been on a Hugo ballot. How many other collections (not by Chiang and not actual Hugo finalist anthologies) can boast such a table of contents?

I haven’t had a chance to read the whole thing yet, but I did read the two stories that are on the Hugo ballot and they are very much what we’d expect. “Omphalos” riffs off the idea of Young Earth Creationism. It takes as its starting point the idea that the creation of the Earth some 8000 years ago is scientifically provable. There are fossil trees that have no rings in their centre because they were created partially grown. There are mummies from Peru that have no navels because those people were not born. But what happens if a scientist makes a discovery that challenges this orthodoxy? The story is a great example of taking an off-the-wall idea and running with it.

As for “Anxiety Is the Dizziness of Freedom”, it is a parallel worlds story, but not the sort you might expect. The novum of the story is a device that allows communication with a parallel world that split off from ours as a result of one of two buttons on it being pressed. A decision has made, and the quantum universe has bifurcated. Chiang talks briefly of how these devices are being used by historians to try to get a better understanding of the processes of history, and Asimov might have run with that, but Chiang’s story is much more personal.

What Chiang realises is that if devices such as this exist, then unhappy people will be desperate to find windows into parallel worlds in which their lives might be different; worlds where a certain decision might not have been taken, or a certain accident did not happen. Such people are emotionally vulnerable, and therefore easy prey for the unscrupulous. Hence conflict, and hence story.

I am, as always, in awe of Chiang’s inventiveness, and of the singlemindedness with which he pursues his premises to their logical conclusions. If science fiction is really the literature of ideas, then the Ted Chiang story is its Platonic Form.