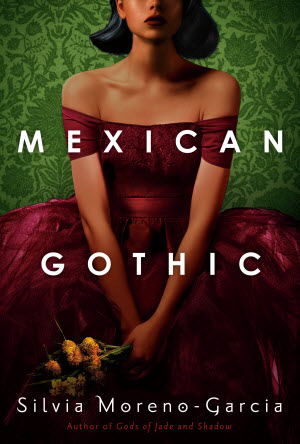 Meet Noemí Taboada: party girl, fashionista, and one of the most eligible young women in Mexico City. Her father despairs of her flightiness, and her absurd ideas about going to university. How is that supposed to get you a husband? But Noemí doesn’t care. She’s young, she’s beautiful and she’s rich. The world is at her feet.

Besides, who wants to get married anyway? At least not yet. Look what happened to her dear cousin Catalina. OK, so Virgil Doyle was incredibly handsome in that moody sort of way, but now poor Catalina is living in some remote town in the south of Baja where the only parties that are ever likely to happen are when a goat has a new kid.

That Cata’s new life is even less sunshine and roses became clear when Noemí’s father received a letter. “… he is trying to poison me. […] They are cruel and unkind and they will not let me go. […] You must come for me, Noemí. You have to save me.” It sounds to Señor Taboada that Catalina has sunk into hysteria or some other sort of women’s illness, but the family honour is at stake and Cata has asked for Noemí, so Noemí must go. Besides, he can dangle a carrot that he knows the foolish girl won’t refuse.

It was the kind of thing she could imagine impressing her cousin: an old house atop a hill, with mist and moonlight, like an etching out of a Gothic novel. Wuthering Heights and Jane Eyre, those were Catalina’s sort of books. Moors and spiderwebs. Castles too, and wicked stepmothers who force princesses to eat poisoned apples, dark faeries cursing maidens and wizards who turn handsome lords into beasts. Noemí preferred to jump from party to party on a weekend and drive a convertible.

Of course, once we meet the Doyle family we can see how deeply suspicious they are. They are English for a start (despite the very Irish name). They were once rich but have fallen on hard times. Their three remaining servants are old and barely speak. And the head of the household is a gloomy, pale chap called Howard.

Old would have been an inaccurate word to describe him. He was ancient, his face gouged with wrinkles, a few sparse hairs stubbornly attached to his skull. He was very pale too, like an underground creature. A slug, perhaps. His veins contrasted with his pallor, thin, spidery lines of purple and blue.

A more obvious family of vampires would be hard to imagine. They even have a graveyard in the back garden. Except that they are living on top of a silver mine, on which their fortune is based. So sure, Mexican Gothic is exactly what it says in the title. It is also far more weird that you might expect.

One of the reasons that I love Silvia Moreno-Garcia’s work is that it is proudly and unashamedly Mexican. Noemí, for all her modern airs, has still been raised a Catholic. The herbalist woman in the town takes payment in cigarettes to donate to her patron saint. There is mention of Lotería cards. A writer who isn’t Mexican simply wouldn’t have done this as well.

The setting is also superb. El Triunfo is a real town in the Baja California Sur mountains, and it really did once have silver mines which shut down in the 1920s. The population these days is apparently a little over 300. It is just perfect for a Gothic horror story.

As well as telling a fun tale with a brave, but often inevitably clueless, heroine, Morena-Garcia has taken the opportunity to take a pop at some of the racist ideas popular at the time (and now creeping odiously back into fashion). Uncle Howard is a big fan of eugenics, and because Noemí has ambitions to study anthropology they have a lot of excuses to discuss such issues. There may even be reasons for Uncle Howard’s obsession. The politics is eased into the book neatly and cleverly.

There will, inevitably, be people who don’t like this book because the lead character isn’t a manly action hero, and the plot isn’t resolved with a firm punch to the jaw. The rest of us, however, should get plenty of enjoyment from it. Sure it is quite formulaic in some ways, but that’s the point. You can’t complain that a book is an obvious Gothic novel when it says on the cover that is exactly what you are going to get. If you are going to do that sort of thing, you need to do it well, and Moreno-Garcia definitely delivers.

This book was a freebie from Jo Fletcher books. They sent it to me because they know I have enjoyed Moreno-Garcia’s work in the past. I accepted it because I know Jo well enough to feel safe reviewing it honestly.