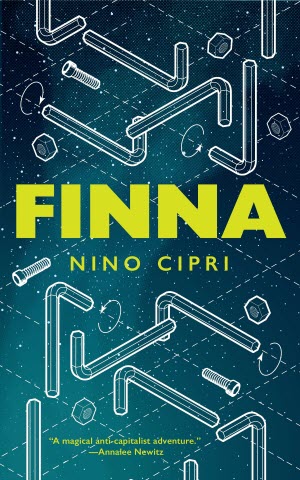 Amy is a young woman with a stack of mental health issues such as anxiety and depression. Jules is a young, Black non-binary person doing his best to survive in an America that is clearly not welcoming to his kind. They both have shitty jobs at LitenVärld, a multi-national purveyor of Nordic kitsch and flat-pack, self-assembly furniture. Awkwardly they have just broke up after a brief and passionate affair. They have sensibly arranged to be on different shifts so that they are not in the store at the same time, but one of their co-workers, whom Amy names as Fucking Derek, has called in sick. It wouldn’t have been so bad had it not been the day that IT happened.

It had all started quietly. Amy had been on the Customer Service desk with Tricia The Manager, at least in part so that Jules knew where she was and could avoid her. A young woman came up to the desk to say that she had lost her elderly grandmother, a Mrs. Nouri. That sort of thing happens all of the time. LitenVärld is a frustrating and confusing labyrinth of themed domestic display settings with evocative names such as Midlife Crisis Mom, Parental Basement Dweller, Coked-out Divocée and Nihilist Bachelor Cube. But when Mrs. Nouri doesn’t respond to public address announcements the staff are sent to investigate. Inevitably Amy and Jules are sent together, and what they find causes Tricia The Manager to wheel out an ancient staff training video.

“We’re here to tell you what to do if a wormhole opens up on your shift!”

“The unique layout of LitenVärld encourages wormholes to form between universes. These wormholes connect our stores to LitenVärlds in parallel worlds.”

And so Amy and Jules are sent off to rescue poor Mrs. Nouri from whatever dangers she might have innocently stumbled into in worlds even less made for aged South Asian grannies than our own is for the likes of Jules. Along the way they encounter carnivorous furniture, killer corporate clones, and a pirate submarine. It is all very exciting, and a whole lot of fun.

FINNA, then, is a comedy novella from Nino Cipri, whom I had the pleasure of meeting at the Helsinki Worldcon. It reminded me a lot of the Bauchelain and Korbal Broach novellas from Steven Erikson, particularly The Healthy Dead, as it exhibits the same sort of satire about corporate jollity and enforced conformity. That is to say, it is very funny. It has the added benefit of being a great story about a fractured relationship between two young queer people.

I note also that Karin Tidbeck was the Swedish Consultant on the book, and Rivers Solomon did the sensitivity read for the character of Jules. So I have complete confidence that both aspects were well handled.

Honestly folks, this is cheap, a quick read, and hilarious. Why have you not bought it already?