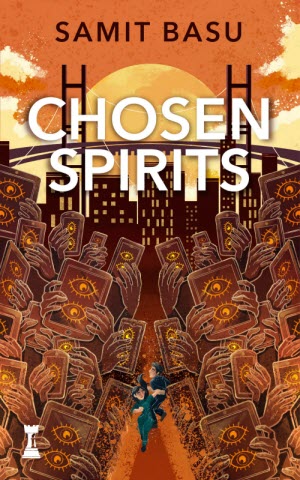 A week or two ago there was a minor spat on Twitter about cyberpunk. I forget who was involved, but as I recall one side was calling for more modern and relevant cyberpunk, while the other was saying that cyberpunk was a dead genre based on an imagined future that no one believed in any more. I would like to suggest that both sides read the new novel from Samit Basu, Chosen Spirits.

There are many different ways to define cyberpunk, but one possible description might be a form of near future science fiction that looks at the effects of computer technology on society in a world that is dominated by corporations rather than governments. That is precisely what Chosen Spirits is. Usefully it is set in India, a country with a far greater rich/poor divide than the USA, and which has suffered from rampant corporate colonialism from the likes of the East India Company down to modern investment by American, Russian and Chinese corporations. One only has to remember the Bhopal disaster, or the Bangladesh sweatshops, to understand that South Asia is a place where corporations feel free to operate with minimum regulation in order to provide cheap goods to rich markets elsewhere.

Today’s news crisis is the discovery of an automated ship in the Indian Ocean swarming with East African climate change refugees, clinging onto the deckless craft like ants in the rain, preferring to risk incredible dangers to cross to unknown lands instead of being slaughtered by European vigilante pirate crews.

The star of our story is Bijoyini Roy, Joey to her friends. She is a Reality Controller, which basically means that she manages the future version of reality TV stars. Basu uses “Flows” rather than “Streams”, but these people are YouTube influencers with TV station budgets and support crews. Joey’s job is to produce the Flow of one of Delhi’s biggest stars, her university pal and ex-boyfriend, Indi. She’s very good at it, which is just as well because her naïve, middle-class left-wing parents have been completely unable to cope with how their world has changed from a nascent liberal democracy to a brutal, authoritarian regime where everything they say and do is liable to be spied upon. Joey, having grown up in this world, knows how to manage herself, and her charges, online. How to get away with just the right amount of social conscience that doesn’t cause her bosses to get an unwelcome call from someone with power and influence.

Joey can’t imagine what that must have been like, the freedom to criticise the powerful and corrupt in your own home. Nothing that had happened since – not the blasphemy laws in several states, not the mass de-citizenings, the voter-list erasures, the reeducation camps, the internet shutdowns, the news censors, the curfews, not even the scary stories of data-driven home invasions, not the missing person smart-scrolls on every lamp-post – had succeeded in convincing Romola or Avik that the world had really changed, that the present was not merely a passing aberration.

The world that Basu builds is not much extrapolated from our own, some of which is fortuitous as he must have written the novel before the pandemic hit. Meetings take place in Zoom-like environments, but everyone has sophisticated custom backdrops, and if they are very wealthy then custom AI that makes it look like they are listening intently but is actually matching their image and expressions to a pre-determined strategy.

The book is also very Indian. There are pushy parents who want you to make just the right marriage to move you up-caste. There is Hindu-Muslim rivalry. There are trains, and police whose brutality, if not sophisticated weaponry, make American police seem tame. Inevitably, there are monkeys. If you have seen Sense8 you will have some idea of what to expect.

There are internet trolls, of course, but Joey has software to screen them out. She also knows how to push the mob’s buttons. Growing a following for Indi is all part of the job. Most of the time it is easy to keep things under control. You just have to avoid major scandals such as, well, accusations of sexual harassment. Did I mention that this book is totally on point now?

Of course you can’t run operation like a Flowco without a lot of money. Much of it comes through sponsorship for product placement. It matters what Indi is seen wearing, what beer he drinks. Where he is seen going shopping. But there are other considerations as well. Shadowy oligarchs with billions in their pockets stalk the dark corridors of the corporate world. Sudden take-overs happen. Priorities change. Meet the new boss, same as the old boss except for the narrative he wants to push though the Flow.

Some of these oligarchs are simply interested in making money in the entertainment industry. Some of them, however, are pursuing much darker agendas, because their business models depend on exploiting the masses in new and interesting ways.

He doesn’t need to see her links to know what’s in them. He knows they’re about trafficking, mass abductions from refugee camps and villages, concentration camps and other things he’s spent his whole life avoiding conversation about. He knows they’re about perfect-child breeding projects using bodies from around the world, the birth outsourcing industries booming in post-law nations, organ-growth sweatshops, body farms, womb-renting factories, sex-slave training centres, cell-harvest centres, gene-testing prison camps. He knows humans will never go really obsolete, because there’ll always be uses for their bodies, right down to the last cell, there’ll always be people willing to use them.

The trouble with being famous is that you end up being useful to people you would much rather not be useful to. And let’s face it, if your job is manipulating people, aren’t you a monster already?

If it sounds gloomy, well it is. Tim Maughan’s Infinite Detail wasn’t a bundle of laughs either. Basu does his best to manufacture a hopeful ending. It kind of works, but then you get to the Acknowledgments.

At the time of writing this, Delhi and India are facing multiple crises, nearly all man-made, and however bleak Chosen Spirits might seem, the truth is that the real world will probably be much harsher: this book is set not in a dystopia, but in a best-case scenario.

This was written before the COVID-19 pandemic hit.

So yes, it is gloomy, but we need science fiction like this. Our world is more interconnected than it has ever been. What happens in India today can easily happen in Europe and North America tomorrow. Indeed, some of it already is.