The Lost Future of Pepperharrow When we left our heroes at the end of The Watchmaker of Filigree Street, Nathaniel Steepleton had settled into domestic bliss with the aforementioned watchmaker, Keita Mori, their adopted daughter, Six, and Katsu, the blue clockwork octopus. Grace Carrow had headed off to Japan with Baron Matsumoto with romance in the air.

That was five years ago, both in our time and in the world of the books. Natasha Pulley has published another book in the same world, but with different characters, in the meantime. However, many people, including myself, have been wondering how Katsu was doing. It is time, at last, for a proper sequel.

The Lost Future of Pepperharrow begins with Mori in St. Petersburg catching up with an old friend who works in the Russian intelligence services. Mori, being a clairvoyant, was deeply involved in intelligence work himself before retiring to become a watchmaker in London. As we all know, spies are often on excellent terms with their opposite numbers. And there is no doubt that Mori and Pyotr Kuznetsov are opposite numbers. Russia and Japan are rivals for control of the Western Pacific. Those of us with some knowledge of history are well aware that the two countries will be at war before two decades are out as they both seek to extend their empires into Korea and China. Kuznetsov is therefore deeply surprised when Mori tips him off that the new Prime Minister of Japan, Kiyotaka Kuroda, has just ordered forty brand new ironclad warships from Britain.

I should break off here to note that most of the new book is set in Japan. This is obviously a potential red flag, given that Pulley is definitely English. However, her biography states that she lived in Tokyo for 19 months, and in any case I am not competent to judge whether he has got anything wrong. Consequently I am going to assume that there is nothing terrible about the book, unless someone who knows Japanese culture much better than I do tells me otherwise.

Back then, to the story. It will be obvious to anyone who knows Mori from the previous book that he is attempting to avert some terrible catastrophe. However, he and Kuroda know each other of old, both being members of the Japanese nobility and of a similar age. Kuroda is well aware of what Mori can do, and doesn’t want his plans thwarted. He’s also the sort of violent, egocentric thug that Boris Johnson would be if he had any samurai skills to back up his self-image as a macho hero.

Kuroda’s plan is to use science to counter Mori’s clairvoyant powers. To this end he recruits Japan’s finest scientists, including Baron Matsumto’s clever new English wife. Mori heads home to Japan because he must if he is to foil Kuroda. He takes his family with him, at least in part because Thaniel has been diagnosed with tuberculosis and the London fog is doing his damaged lungs no good whatsoever. Which is all very well until they arrive at Mori’s ancestral home to discover that it is occupied by his wife, a half-English woman called Takiko Pepperharrow.

Of course Mori had not forgotten that he had a wife, but he had neglected to tell Thaniel about this salient fact. This is all very awkward.

There we must leave the summary of the plot, for there is much to develop and I don’t want to spoil your enjoyment of it. Anything with Mori involved is likely to be deeply convoluted because you know he’s running plans within plans, and that any random thing he does could turn out to be vitally important at a later date. Including getting married. Suffice it to say that everything I have mentioned is important somehow.

So instead I’m going to talk a bit about Pulley’s writing. Firstly there’s just the style. How many people would describe one of their lead characters like this?

He had the most unexpected voice of anyone Pyotr knew. He was a nymph of a man, but he sounded like petroleum fumes would if they’d had anything to say.

While Pulley has obvious sympathy for Keita and Thaniel as a gay couple, she’s not going to shy away from the historical situation in which she has placed them.

They didn’t hang people anymore, but that was only because the doctors had managed to classify it all as a kind of madness – moral insanity.

Finally there is Katsu, who doesn’t feature much in the story, but who is his delightful octopus self when he does.

Katsu was floating origami boats on the pool, gleaming in the light of the bright crescent moon. Once the boats had drifted out a bit, Katsu dived into the water and then engulfed one like a miniature kraken, making what might have been the clockwork octopus version of kraken noises.

This is a very lovely, and very clever, book, and if you are anything like me when you get to the end you will sob uncontrollably. Recommended. 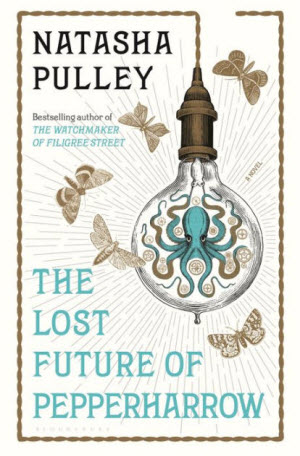