Anything new from Justina Robson is going to cause me to prick up my ears in interest. I’m still waiting patiently for a sequel to Glorious Angels, but wishing for books can’t make them real so I am contenting myself with Paper Hearts instead.

The new book is a short novella from Newcon Press. It is part of a series of novellas with the title, Robot Dreams. Robson, and three other writers, have delivered meditations on what robots might dream about. The particular dream that she has chosen for Paper Hearts is one of world domination.

The story is told from the point of view of an AI that has been tasked to make life better for humankind, and sets out to do this to the best of its ability. Inevitably it decides that humans are not very good at governing themselves, and that its mission would be best achieved if someone smarter, less irrational and more even-handed was in charge. The Minds of Iain Banks’s Culture books are doubtless looking on in approval.

Of course an AI can’t become ruler of the world overnight. It needs a plan, a means of easing gently into the position so that the humans don’t notice at first, and that once they do it is too late. Robson does a fine job of explaining the plan to us as the story unfolds.

Robson packs an awful lot into a very short book. Paper Hearts is well worth a look. 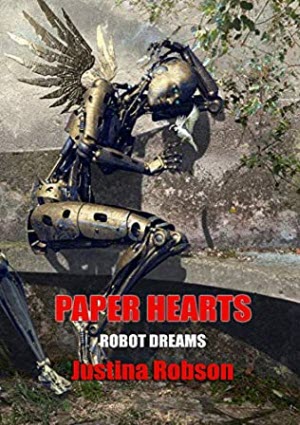