I don’t think that anyone can contest the fact that Martha Wells as hit on a very successful formula with her Murderbot Diaries. She’s won two Hugos and a Nebula with the novellas, and might have won more had not there of the novellas come out in the same year. All got enough nominations to be on the final ballot, but Wells elected to withdraw two of them. Now we have a novel. It is a hot favourite for next year’s Hugos? Undoubtedly.

The issue with a successful formula, however, is that it can get stale. For example, I loved Naomi Novik’s Temeraire books when they first started, but over time they became a bit formulaic and I stopped reading them. Wells will want to avoid that for as long as possible with Murderbot. I am pleased to report, so far so good.

Network Effect begins with Murderbot accompanying some of the humans from Preservation Station on a research mission. Dr. Mensah’s daughter, Amena, is among the crew. There’s a small problem with pirates that Murderbot quickly resolves, but on the way home their ship is hijacked by aliens and hauled through a wormhole into distant star system. The aliens look like, “tall, thin augmented humans, with a dull gray skin.” So big gray men, then? I’m afraid I imagined them as smaller for the rest of the book.

The story turns into an investigation of a Lost Colony. Wells has built up a nice backstory for the Murderbot world involving initial expansion of human space, then disastrous collapse, then a period of rediscovery which we are now in. This allows for fun archaeological stories.

It also features the return of Perihelion, aka ART, which stands for Asshole Research Transport. This spaceship first appeared in Artificial Condition, and became a firm friend to Murderbot. It provides an interesting foil for our hero, because it is entirely a construct (and a very large one) rather than a humanoid cyborg. Murderbot calls it ART in the same way that two Australian men might greet each other with the phase, “G’day y’old bastard!” in the course of the story it becomes clear that Murderbot and ART are very firm friends indeed, and the humans have to help them out with the whole “processing feelings” thing. It is all very cute.

It turns out that ART is a much more interesting and adventurous character than we had previously known. It works for a university, and I don’t think it is too much of a spoiler to say that it and its crew are engaged rather actively in the struggle between free system, such as Preservation, and the serf economy of the Corporate Rim. Wells has a political aspect to the books which is developing nicely.

As for the plot, it is a nice three-way tussle between Murderbot & friends, the aliens, and a ship owed by a corporation called Barish-Estranza. Murderbot gets some interesting choices to make, and some pretty serious opposition in the form of the alien technology. Wells knows how to craft a plot. She should do. Her first novel was published in 1995 and she has more than 20 book-length works to her credit, plus a whole heap of short fiction. It has taken her this long to have a massive hit. So if anyone says that your career is over if you don’t have a hit with your first novel, don’t listen to them.

Given how Wells set up the ending, it appears that there may be more stories featuring Murderbot and ART in the near future. Indeed, a new novel has already been announced. This is great, because as far as I’m concerned the whole thing is still fresh and new. I hope that it can stay that way, because Murderbot books are the sort of fiction that I tend to devour in a single sitting. It is a challenge, though. The only other series I can think of where I am eagerly awaiting the next novel are Mike Carey’s Felix Castor books, and of course Juliet McKenna’s Green Man books.

To keep the series buzzing, Wells will have to continue to develop Murderbot’s personality, and presumably the relationship with ART as the ship appears likely to become a recurring character. She’ll also need to delve more into the struggle against the Corporate Rim. I hope that she can keep it going for a long time. After all, The Rise and Fall of Sanctuary Moon has well over 200 episodes.

Taking of which, where is my Murderbot TV series? 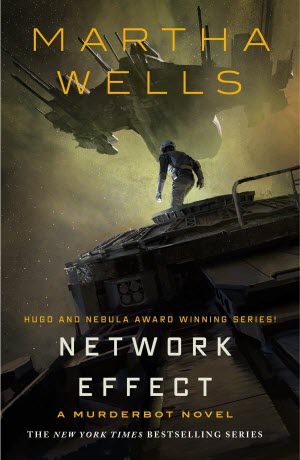