We hear a lot these days about books and authors being “of their time”, and of the Suck Fairy visiting beloved classics. Normally this is in connection with some old-time white male author who says something terrible in one of his books, but what about feminist classics? When a feminist book club I know of decided to read Herland I thought I had better find out how well it stands up these days.

Some history first. Herland was first published in 1915, serialized in The Forerunner, a feminist magazine that Charlotte Perkins Gilman happened to edit. You’ll often see the book referred to as a “lost classic” of feminist science fiction, but a quick look at the publication history on Wikipedia shows that it has been re-published 11 times since, and they have missed out the 2015 edition that I have here, and the 2020 edition referenced below. There’s a whole lot of other editions on Amazon as well. What that tells you is that feminist SF becomes “lost” incredibly quickly after publication.

The basic plot is that three young men discover a mysterious lost world deep in the jungle where they find a civilization comprised entirely of women who reproduce by parthenogenesis. The men have a variety of reactions to their discovery, some positive and some very negative. You can tell by the characters they are given who is going to do what. We know from the start that an attempt at rape is inevitable. Gilman uses this setting to hold forth on her ideas of what a utopian feminist society would look like.

While the book might seem to have been influenced by Conan Doyle’s The Lost World (1912), critical discussion of the book suggests that a greater influence might have been H Rider Haggard’s She (1887). Conan Doyle’s book is set on a plateau in the Amazon jungle, but it is Rider Haggard’s book that features a matriarchal society which is penetrated and conquered by a manly hero. She is also replete with themes of social degeneration that will become such a stock in trade of HP Lovecraft’s work. As we’ll see, such eugenics-influenced ideas also play a part in Gilman’s story.

The first thing that struck me as off when reading Herland is that the women who live there are white. The exact location of Herland never given, but it can only be in the jungles of Africa or South America. Nevertheless, Gilman is clear as to the ethnicity of her ideal people. Her narrator says:

There is no doubt in my mind that these people were of Aryan stock, and were once in contact with the best civilization of the old world. They were ‘white’, but somewhat darker than our northern races because of their constant exposure to sun and air.

The concept of Aryan physical perfection is also present in the idea that the women of Herland never get sick:

Sickness was almost wholly unknown among them, so much so that a previously high development in what we call the ‘science of medicine’ had become practically a lost art. They were a clean-bred, vigorous lot, having the best of care, the most perfect living conditions always.

That the idyllic society of Herland is a result of selective breeding is made clear when our manly explorers ask about things such as crime. One of the women says:

‘But it is – yes, quite six hundred years since we last had what you call a “criminal”. We have, of course, made it our first business to train out, to breed out, when possible, the lowest types.’

Herland, then, is a deeply eugenicist society. So much so that they have selectively bred cats until they got a species that would not kill other animals. Herland’s commitment to non-violence is commendable, but there are limits. (And in any case the cats would doubtless have destroyed them long before that plan could come to fruition.)

The other thing that struck me about the book is the attitude towards sex. Because the Herlanders reproduce by parthenogenesis there is no need for sex, therefore no one has it. When the narrator, who has the slightly ridiculous name of Vandyck Jennings, explains to a Herlander he has become friendly with that in our world people have sex for fun, and because they love each other, she is horrified.

‘But – but – it seems so against nature!’ she said. ‘None of the creatures we know do that. Do other animals – in your country?’

Clearly the Herlanders were not very observant of the sexual habits of the local wildlife. But equally I don’t think that an asexual utopia would go down well with most modern feminists. Also we have to assume that a desire for sex is something that the Herlanders deliberately bred out of their society.

Obviously the book isn’t all bad. It has a lot of good things to say about the stupidity of men, mostly through the mouth of Terry, the “action hero” character amongst the explorer trio. The Herlanders also live very much at one with Nature, taking only what they need and being careful to manage their environment in a responsible and sustainable manner. Terry’s boorish behaviour is probably a bit simplistic and stereotyped for a modern novel, though you only need to spend a few minutes reading the replies from men to women who express opinions on Twitter to come to the conclusion that men like him are still plentiful.

In conclusion, I’m glad I re-read it, but yes, culture changes. Even feminist heroes of the past can have feet of clay. 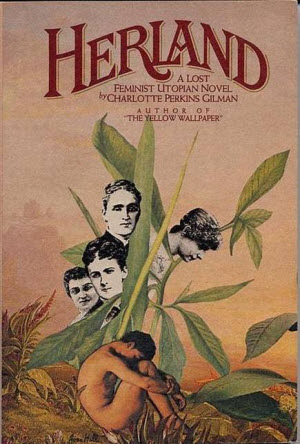