There’s a lot of interest in global pandemic stories these days, for obvious reasons. Over at the LA Review of Books, my friend Rob Latham has looked at one of the classics of the genre, Earth Abides by George R Stewart. The book was originally published in 1949 so there’s a lot of pressure on it to hold up. I don’t remember the book quite as well as Rob does, but there’s no requirement that critics should agree. You can check out Rob’s review (linked to above). Here is mine, reprinted from the ConJosé Special issue of Emerald City.

Well, well, yet another book in which disaster strikes mankind and the world is depopulated. In Earth Abides, George R. Stewart goes much further than either Pat Murphy or Michaela Roessner. His great catastrophe, like Murphy’s, is a plague, but he postulates that it is so virulent that there are only a few hundred survivors, maybe less, in the whole of the USA.

Stewart’s hero, Isherwood Williams (“Ish”), is a graduate student in geography at UC Berkeley. While away on a field trip he is bitten by a rattler and spends several days holed up in a woodland cabin fighting off the venom. When he emerges, there are almost no humans left alive. Everything else is pretty much as it was, save for the occasional evidence of looting, but there are no people. They are all dead.

Eventually Ish manages to find a few other people alive in the Bay Area who have not been driven mad by the disaster. He sets up a small community based around his parents’ home and starts to plan for the future. But alas, most of his plans come to naught, for he is opposed by that most implacable and terrible of foes, the author.

Stewart’s thesis, which drives all of the plot, is that civilization is an aberration that arises thanks to a peculiar set of circumstances. It needs a strong leader, and probably some sort of smart subordinate, to make it happen. (Arthur’s Britain, for example, could not have happened without both Arthur and Merlin.) Once started, however, it has a life of its own. To succeed in civilization you have to copy the drive and initiative of its founders. But Stewart claims that, left to their own devices, human beings are essentially lazy and will not want to be civilized. Indeed, he adds, they will be much happier that way.

The final point is a matter of conjecture and is not provable either way. The rest of the argument, however, is debatable. Having spent the last 3 years watching a Worldcon committee develop, I have a certain amount of sympathy with the idea that drive, initiative and willingness to take responsibility are not common human traits. However, I’m not convinced by Stewart’s arguments. In this my lack of suspension of disbelief is seriously hampered by the fact that the book was published in 1949, and consequently has a very different view of the world to that which many people have now.

The age of the book is obvious to begin with from the style. The writing is much more pedestrian and didactic than most books published today. Stewart also clearly comes from an intellectual environment that believes human beings can be easily categorized. The book is full of references to how people’s reactions to the plague can be understood and predicted once you know whether they are black or white, male or female, intellectual or laborer. Thankfully this sort of sociology has been well and truly debunked in the 50+ years since Earth Abides was written.

More pertinently, however, Stewart believes that most of the benefits of civilization can only be achieved through government planning. Whether this is a result of 1940s attitudes, or simply a product of the People’s Republic of Berkeley, I’m not sure, but it heavily colors his argument. For example, should I find myself in a similar position to Stewart’s hero, amongst the first things I would do would be to secure a supply of water and to look for a small wind generator. Ish does neither. When power and water fail, he and his community simply accept the fact. Ish wants to do something about it, but feels that this is impossible without Government. For the most part they don’t even bother to farm, relying on scavenging from grocery stores to begin with, and then on hunting. Even agriculture is too much work for them.

(As an aside here, Stewart seems to have little idea how public utilities work. While electricity fails very quickly, the water supply keeps working for years. Stewart doesn’t seem to realize that in order to provide water pressure in homes you need to pump water upwards, and that is normally done using electricity. I guess if he had that little interest in the process it is reasonable for him to assume that others would be similarly ignorant.)

I should say that, stylistic issues aside, the book is well-written and full of beautiful pathos. It won something called the International Fantasy Award (now defunct, but it is an honor that the book shares with Lord of the Rings), and probably deservedly so. It was also made into a popular film. However, science fiction is a genre littered with tales of triumph over adversity. For the SF fan, it is hard not to develop a dying urge to slap Stewart’s characters around the face and remind them that they are human beings, not sheep. 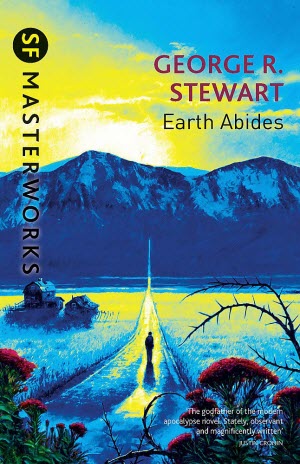