Some time ago now, Stark Holborn did a reading at BristolCon Fringe. She read from an as-yet-unpublished story that was a fantasy Western, with the fascinating twist that the special powers her outlaws had came not from magic, but from mathematics. That story has finally seen publication as the novella, Triggernometry.

As a conceit, it is completely bonkers. Of course, I would expect no less from Holborn. Her last Western book was called Nunslinger. Off-the-wall ideas are what she does. The important point is that she makes it work.

The basic plot of Triggernometry is pure Western. There’s a gang of outlaws, notorious for a string of outrageous heists. However, things have gotten a little too hot for them, and they are trying to retire. Then one of them comes up with news of One Last Job that will make them so much money that they can disappear wherever they want and never have to work again.

Along the way there are all the usual tropes: the saloons, the gunfights, the long horse rides through inhospitable country and, inevitably, the betrayals. It is beautifully done. Anyone who has been watching The Mandalorian will be entirely familiar with all of this.

Mixed in with the Western tropes, however, are a whole series of jokes and puns about mathematics. I suspect that I only got a small fraction of them, because I don’t know enough about the history of the discipline. I have no doubt that Holborn has done her research, and that the characters of Pierre de Fermat, Emmy Noether, David Hilbert, Sophie Germain and Solomon Lefschetz all have some connection to the personalities and/or work of their real-life counterparts.

I’ll be talking to Holborn for my radio show soon after this issue goes live. A version of the interview will appear in the next issue.

Given the current weirdness, Triggernometry is only available as an ebook, but that means it is ridiculously cheap. It’s a steal. 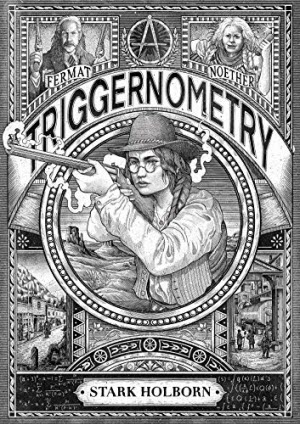