The City We Became There are a number of highly anticipated SF&F releases this year, but a new book from NK Jemisin has to be top of many people’s lists. Jemisin did, after all, win the Best Novel Hugo for all three of her last books. Can she keep up that record? You know, she just might.

Then again, the Broken Earth trilogy is very traditional SF. It is set in the very far future, and it is possible to read almost all of it and be blithely unaware that you are being fed a political message alongside the enthralling alternate reality. The City We Became is set in our world, in our time. And in it, as some her of her characters might say, Jemisin has taken her earrings out. If you thought that her Hugo acceptance speech in San José was a little on the nose, well sister you ain’t seen nothing yet.

Naturally I love the book all the more because of this.

However, let us start at the beginning, with the cover. Right up the top there is an enthusiastic quote from Neil Gaiman. “A glorious fantasy,” he says. That’s an excellent choice of blurb, because in some ways The City We Became has a lot in common with Neverwhere. Both are set in major capital cities that their respective authors know well. Both feature characters who are embodiments of parts of those cities. There, however, the resemblance largely ends. Jemisin’s book does not involve an exploration of New York Below. Rather it says very much above ground, because the city is under attack, from Things Not Even New Yorkers Were Meant To Know.

The “We” of the title does not refer to the people of New York in general. Rather it refers to six specific people who become avatars of New York. The City, you see, is waking up, in the face of an existential and mystical threat. The chap in the funny house in Greenwich village doesn’t seem to be about, so the City has to defend itself. It turns out (and this will doubtless upset a lot of New Yorkers) that it is not the first city on Earth to awaken. Many older cities have done so in the past. São Paulo, being the most recent city to awaken, is on hand to help the new kid find its feet.

New York, however, is a complicated city. While it does have a single avatar to represent the whole city, it also has five more representing its very diverse boroughs. This has happened before, in London. The whole thing was a disaster. Jemisin doesn’t explain exactly why, but I have this horrible vision of avatars dressed in rival football kits beating each other to death. New York must get it right, because if it doesn’t, well, Things…

It is the five boroughs who are the stars of this book. We first meet Manny, Manhattan, who is young, brash, ambitious, recently arrived in the City to do a PhD in Political Theory at Columbia. He also has amnesia, which might be just as well because the glimpses he has of his past life suggest a level of ruthless violence that he finds uncomfortable.

Next we meet Brooklyn Thomason, formerly MC Free, one of the first female rap stars but now a respectable city councillor. She’s black, a single mother, but comparatively well off.

Contrast her with Bronca, The Bronx, who was actually at Stonewall and has kept her links with alternative culture since. These days she’s a director of an arts collective, with a bunch of other young women of a variety of ethnicities as colleagues. She and Brooklyn are two Black women who are not going get on.

Queens, Padmini, is fresh in from India and doing a PhD in Financial Engineering because she thinks in math the way other people think in words or pictures. Her family have put all their savings into sending her to America, and now she lives in an apartment building in Queens with Aunty Aishwarya. All this New York stuff is a bit strange to her.

And then, of course, there is Karen. Aislyn Houlihan lives on Staten Island. Her father is a police officer who flirts with neo-fascism. She’s been brought up to fear anyone who doesn’t have white skin. She doesn’t want anything to do with that horrible, dangerous New York place. After all, it is full of foreigners, which means potential rapists. She knows, from watching her mother, that her father is a violent, controlling misogynist shit, but she also knows that she’s safer with him than she would be with Those People.

The final major character of the book is Dr. White. She favours white trouser suits and has a bad habit of calling the police on people she thinks might be guilty of Walking While Black. She’s best buddies with the angry young men of the Alt-Right. Bronca is in no doubt what sort of person she is.

She shrugs. “People who say change is impossible are usually pretty happy with things just as they are.”

It’s a dig at the woman, with her expensive suit and power-professional haircut and the whole more-Aryan-than-thou aesthetic she seems to be working. All Bronca’s life, women like this have been the ones to watch out for—“feminists” who cried when their racism got called out, philanthropists who wouldn’t pay taxes but then wanted to experiment on kids from broke public schools, doctors who came to “help” by sterilizing women on the rez. Beckies.

Unlike Aislyn, however, Dr. White is not a Handmaiden of the Patriarchy. She is something else entirely. Wherever she goes, tentacles follow.

Yes, tentacles, because so much of this book has grown out of HP Lovecraft’s existential dread of The Other. As you may recall, he lived in New York for a while and had nothing good to say about the place. Jemisin has taken Lovecraft’s real-life racism, the fiction that it fuelled, and the modern far-right movement that worships it; and pulled them all into this glorious novel that is absolutely about how we live now.

The City We Became is the first volume of a trilogy, so there’s a lot of story to come yet. I suspect that there will be a lot of focus on Aislyn’s story arc as it represents a fault in modern feminism as deep and wide as anything that Alabaster could have created in the Broken Earth trilogy. For now, however, we all have to wait for the next book. It can’t come soon enough. 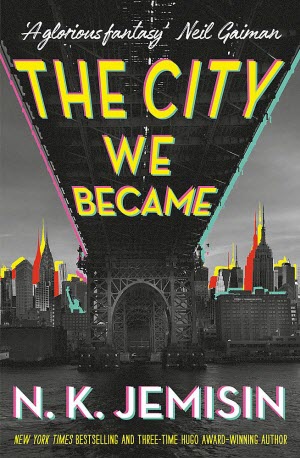