This one took a little getting in to. The Unspoken Name is a debut fantasy novel by AK Larkwood. It is a large tome, and begins as if it is going to be very serious, and possibly a bit gloomy. Our hero, Csorwe, is an adept in a religious cult known as The House of Silence, devoted to the worship of The Unspoken One.

In the library of the House of Silence, there was a book bound in the skin of a murdered king, or so it was said. There were books in cipher, books in obsidian, books in whale hide. There were atlases of ruined cities and blighted worlds. There were useless maps to every treasure ever lost to time, and lexicons of every forgotten language.

Csorwe, it transpires, has been chosen to be sacrificed to her god on her 14th birthday. But she is rescued and spirited away by a mysterious wizard called Sethennai who is trying to regain his throne in another world, and find a mysterious thing called the Reliquary of Pentravesse. So far, so very fantasy.

However, it soon becomes clear that Larkwood isn’t taking things nearly as seriously as you might have supposed. The whole regaining the throne thing takes just over 100 pages of a 450 page book. It is, it transpires, backstory. Had I been editing this one, I might have suggested that Larkwood start at the beginning of the real story, and put all this preamble in flashbacks. I nearly gave up after the first section, and I suspect that other people might too.

Thankfully I didn’t because, once the main story gets going, it pulls you along at a fair old lick. You discover that the book is part comedy, and part slow-burn lesbian romance. Csorwe is tasked by Sethennai with chasing down the mysterious reliquary. She is given a partner called Tal who is one of those gay guys whom everyone else dismisses as useless because he’s a bit effeminate and inside is burning with macho desire to prove everyone wrong. Csorwe, in contrast, is a competent if somewhat reckless thug. The two of them hate each other, but need each other’s talents. They are opposed by Oranna, the Evil Librarian of the House of Silence who wants the Reliquary for herself so that she can become one with The Unspoken One and conquer the universe in true Evil Overlord style.

The book lurches between the amusing banter of Csorwe and Tal, and the absolute horror of the things that Oranna is prepared to do in order to get her own way. Meanwhile we get to meet a girl wizard called Shuthmili who is beautiful and doomed and absurdly deadly if she ever loses her self-control.

Having got into the book, I really enjoyed the rest of it, but I have questions, so many questions.

The worldbuilding is really interesting. The book is set in a universe where there are multiple worlds (I hesitate to call them planets because they might not be) that are connected by what seems to be a wormhole system called The Maze through which people sail in boats. It is interesting and innovative, and we learn very little about it.

Magic, in this world, is done by siphoning power from gods, actively if they are weak, and by importuning them if not. The Unspoken One wants blood. Lots of blood. Some of the worlds our heroes visit have been laid waste by powerful magics and/or angry gods. The search for the Reliquary means that much of the action has an Indiana Jones tinge to it.

Csorwe is an orc. Or maybe a troll. Anyway, she has tusks. One of them gets broken off in a fight in the backstory section and is replaced with a prothesis. This is apparently important enough to be used in the cover art, but is hardly ever mentioned again. Some people in the worlds of the book have tusks and others don’t. There’s no racism.

Finally, there is the Reliquary, which is apparently full of all sorts of magical knowledge. If Oranna gets hold of it she might be able to become an immortal avatar of The Unspoken One, and yet no one seems to take this danger seriously. All of the characters are much more interested in their personal objectives.

I’m pretty sure that hard core fantasy fans will be upset by this one. It has lesbians, for a start, but also it makes no attempt at cod-medievalism. At times the milieu of the book seems to be 21st Century Earth.

It wasn’t fair to pull someone out of a horde of revenants and immediately leave her to fend for herself on public transport.

That could have come straight out of an urban fantasy novel. And that might be a key to what we have here. Backstory aside, the book reads like an urban fantasy story set in an epic fantasy universe. Which is not necessarily a bad thing, but might throw some readers.

There’s one more thing that I should mention. The book is replete with themes of ambition and duty ranged against life affirmation. Most of the main characters, at some point, turn their back on a life that has been mapped out for them by someone else. This might involve not getting sacrificed to a bloodthirsty god, or it might involve opting out of a safe but frustrating career to have a life. That’s something I can sympathise with. I tried being a corporate drone. It was horrible. I’ve been much happier, if much poorer, since. 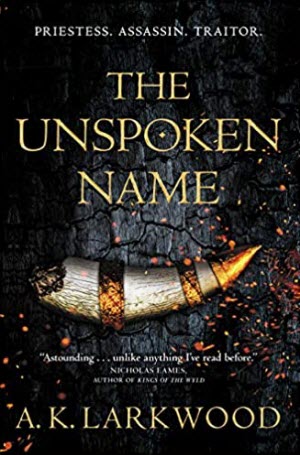