The City of a Thousand Feelings This is another book from the Aqueduct Press Conversation Pieces series. It is thus quite short. (I read it in a few hours one morning.) It is also definitely a conversation piece and what one might term “experimental”.

The author, Anya Johanna DeNiro, is a trans woman. She had work out prior to transition so she’s had little option but to take that step very publicly indeed if she wanted to continue writing. The City of a Thousand Feelings is, to some extent, an allegory about gender transition. The City of the title is a place where socially acceptable people live, and at the start of the book it is being besieged by an army of trans folks who want admission. The City would rather flee or fight than open its gates to them.

While the people of the City are merely stand-offish, the true villains of the story are a cult of necromancers called Corpse-Mongers. If you look at them askance you might catch a glimpse of religious fundamentalists hiding behind their cowls.

Such a work is not going to resonate with everyone. Indeed, because gender transition is an intensely personal process, it won’t even resonate with all trans women. But there are two aspects to the story that I think work well and are worthy of examination.

The first is focus on feelings and loss. The City in the story is a place where emotions are celebrated. The fact that the army of trans people is kept outside is not just a mark of their lack of social acceptance. It is an indication that they are not allowed to feel happy, or safe, or loved. The only emotion that they are allowed is one of loss. That’s a brutally sharp observation of the trans condition, and it is one that thankfully will not resonate with all of us, but for far too many it will ring uncomfortably true.

The other aspect is a form of resolution that strongly echoes the one in Dark and Deepest Red. It is fascinating to see two books by trans writers in the same month that come up with very similar forms of salvation. That gives me a lot of hope for a community which, these days, is very much under siege.

If you are not interested in the trans themes, you may be interested in a fantasy story that is determinedly different and ambitious. It is also short, of course, so there’s not much to invest. Why not give it a try? 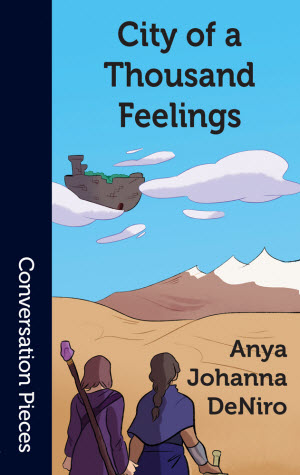