Well, this is a weird one. That’s a compliment, of course.

Beneath the Rising is a story of tentacled monsters from beyond the stars trying to take over our world, and being fought off by a couple of plucky teenagers. But if you think that makes it standard Lovecraftian fare, or standard YA fare, you would be wrong on both counts. Premee Mohamed has crafted something quite different.

Nick Prasad is an ordinary teenage boy of South Asian descent via the Caribbean. He and his family now make their home in Canada, so he does stand out a little from the crowd, but other than that there is absolutely nothing special about him, except for his best friend from school.

Johanna ‘Johnny’ Chambers is an ordinary teenage girl in the same way that Smaug is an ordinary lizard. She is The Girl Einstein; the Girl Who Cured HIV; the Girl Who Cured Alzheimer’s; and so on. She has more billion-dollar patents to her name than most teen girls of her age have lipsticks. Her home has a massive, multi-story basement full of laboratories and stuff, and Ben, her pet Giant Pacific Octopus.

So what exactly do Nick and Johnny have in common? Well it so happens that when they were both much younger they were caught up in a terrorist attack. They both survived, and ended up with a strange friendship. Nick idolises Johnny, and she see him as one of the few humans that she is able to have a connection with; someone who doesn’t only see her as the great Girl Genius.

Johnny, of course, cannot rest. A mind like hers is forever coming up with new ideas. Her latest scheme is to help stop climate change by coming up with a means of generating limitless free energy. Maybe it is cold fusion that actually works. Maybe it is zero point field energy. Or maybe she is tapping into a source of energy that is Somewhere Else. And that Somewhere Else might just be inhabited.

So it transpires that Nick and Johnny have to save the world, while it is falling apart around them. They have to deal with strange and ancient cults. They have to journey to the world’s oldest libraries and look for books that seem to have a mind of their own. And they have to face down That Which Man (and Girl Geniuses) Was Never Meant To Know; all the while facing up to the fact that their relationship is deeply dysfunctional.

The trouble is that while Nick might see Johnny as an ordinary human, her view of humans, and her ways of having relationships with them, are anything but ordinary. Nick explains:

When you have money you think the way people with money think, because that’s the influence. Ordinary rich people buy homes, plural. The super rich make homes everywhere. People like her, though, don’t need a home; they have nothing that they are worried about keeping, they know they can replace anything, literally anything, even if it is supposed to be one of a kind.

One of the places that they end up (it is in the cover blurb, but hey, old libraries) is Nineveh. Obviously this attracted my attention. I have to say that Mohamed knows far more about tentacled monstrosities than she knows about Assyriology, and that’s OK. It is all fantastical in an Indiana Jones sort of way. Besides, she also features the University of Fes in Morocco, which pleases me greatly because it is the oldest university in the world and was founded (in 859) by Fatima al-Fihri, the wife of a wealthy Muslim merchant.

Getting to Nineveh is another matter, because it is in Iraq. Because of that, the book is not set in the present day. It is set in an alternate 2002 in which the al-Qaeda attack on New York was an embarrassing failure. Mohamed doesn’t really examine the effects of this very much. Airport security still exists because the attack might have succeeded. Everything else is pretty much the same, except that travel to archaeological sites in Iraq is not as deadly as it would be now. That’s an interesting conjecture that I can see people having convention panels about.

Anyway, that’s a bit of a red herring. What is the book like? As I said earlier, it is not what you might expect. This is not a Call of Cthulhu adventure in novel form. Nor is it a teenage romance. It is by turns funny, weird, terrifying and full of tension. Above all it is a story built on the dysfunctional relationship between Nick and Johnny, which must be resolved if the world is to be saved. It is very much its own thing. And that, I think, is a very good thing. 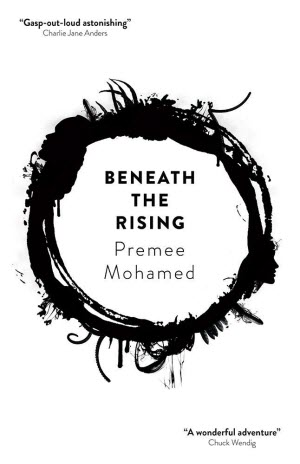