To Be Taught if Fortunate Up until now, Becky Chambers is someone whose work I have enjoyed, but not specifically sought out. Generally I would read her when other people voted her onto award ballots and I needed to have an opinion. To Be Taught if Fortunate has changed all that. I will now be buying new Becky Chambers books when they come out, because this is very good.

The book is a novella, and tells the story of a human expedition to another star system. You could describe it as a first contact story, but none of the lifeforms the crew encounters is what we would regard as intelligent. It is more a story of space exploration, how it happens, and why we do it. If I had to write an elevator pitch for it, I would say it was, “A Kim Stanley Robinson story written by a woman.”

It reminded me a lot of parts of Red Mars, where Robinson is talking about the process of sending a spacecraft and crew to another planet. There’s even a certain amount of listing of equipment. But Chambers is also very interested in her crew as human beings, and not in a “someone must go crazy so we can have conflict” way.

The crew’s target system is 14 years travel away and the crew is in cryosleep for the duration of the journey. Chambers has her narrator note that each crew member has a cabin, and care has been taken to help them adjust when they wake up. It is a small detail, but one that shows she’s thinking about how such a mission would work.

Of course people will ask what Chambers knows about “real” science fiction. Her previous novels have not been what one would describe as “hard SF”. This one definitely is, so there will doubtless be dudebros itching to point out perceived errors. However, Chambers’ mother is an astrobiologist and I’d happily wager that she knows far more about life on other planets than the average “well actually” guy on social media.

The plot, such as it is, is mainly about the various planets that the crew explores, the things they find there, and what this means to them. Towards the end of the book, however, they are influenced by events back on Earth, a place to which they are expected to return. I won’t say more than that because of spoilers, but I found this a delightful little book and one well worth going up against an incredibly competitive novella field in this year’s Hugos. 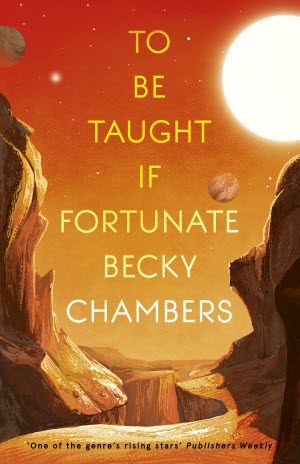