Well there’s a thing. A new novella from Aqueduct Press set in a post-apocalyptic world in which the apocalypse in question is Sumerian gods returning to Earth. In theory the world should have been destroyed, but something has gone wrong and the expected Rapture has been delayed. In the meantime, lots of people are dying and ending up in the Plains of the Imperfect Dead, rather than in the Netherworld. Fortunately for us humans, one young girl from Decatur, Indiana has been receiving prophetic dreams. It is apparently up to Gillian, and her Best Friend Forever, Mel, to journey to the Netherworld, find a being known as The Rampant, and get the apocalypse re-started.

So, teenage lesbians v monsters from Sumerian myth it is. Bring it on!

Of course, I had to read this. Mainly I had to read it to see if Inanna was mentioned and if so how. Much to my surprise, she doesn’t feature at all, despite being the original star of the Descent into the Netherworld. Thinking about it, however, Julie C Day might have dodged a bullet here. Knowing how quick Herself can be to take offence, and Her penchant for smiting people when She does, leaving Her out might have been a wise move. Besides, Day redeems herself. Of course Ereshkigal has to be in the story. The Netherworld is her domain. But Day portrays her as a) not in charge, and b) a pompous twit. She does get to ride a rather cute elephant (don’t ask), but it is clearly a nicer person than she is so that’s OK.

Day is therefore safe from smiting, and free to craft a fun story that an impressive degree of originality. I found The Rampant a little obscure at times, because while Gillian and Mel are clearly speaking English the way in which they do so is somewhat foreign to me. The speech patterns of teenage girls from Indiana are clearly not that close to the English I speak. But I did manage to follow the action, and I enjoyed the story. It is great to see someone prepared to do something so completely off-the-wall.

Also no smiting, which is always a relief where Herself is concerned. 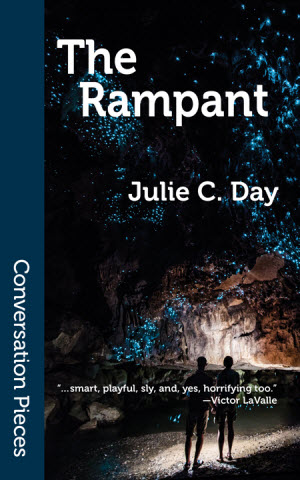