The Menace from Farside I have been a big fan of Ian McDonald’s Luna series (or Dallas on the Moon, as it is often known). Therefore when I heard that there was novella available in the same setting I had to get hold of a copy. The Menace from Farside is set somewhat earlier that the dramatic events of the novels, but it is very much in the same vein.

The story revolves around the complexities of lunar polygamy. Part of the diplomatic structure of lunar society is the concept of a “ring marriage” where two parents raise children (some of whom may be adopted), but each parent also has a second partner and second home, and perhaps even second family. This is a means of making all of the great families of the Moon interconnected, and hopefully less likely to kill each other. As if Lady Luna herself wasn’t good enough at killing humans already.

Cariad Corcoran is a self-assured teenager who has ruled over her siblings for some time. However, a divorce and re-marriage in the ring has resulted in a new parent, and a new sibling. Sidibe Sisay is tall, fit, elegant, and older than Cariad, and therefore a clear threat to Cariad’s position. There is much teenage angst.

For reasons that never quite made sense to me, Cariad organises an expedition to the site of the original Apollo moon-landing so that the kids can take a selfie there to make a wedding gift for the new parental unit. But this, dear readers, is the Moon. No matter how well planned, such an expedition is fraught with danger. When it has to be planned in secret by a bunch of teenagers, well, you can guess. Teenage pranks on Earth can go badly wrong; teenage pranks on the Moon are almost always deadly.

That’s pretty much all there is to the book. It allows McDonald to do some more exploration of the interesting identities and customs that have grown up in lunar society. One of the kids is a neko; someone who identifies as a cat. It also allows for a certain amount of examination of the nostalgia around the 50th anniversary of Neil Armstrong’s famous footprint. It is a fun addition to the Luna series, and especially to the social themes that underlie that series. 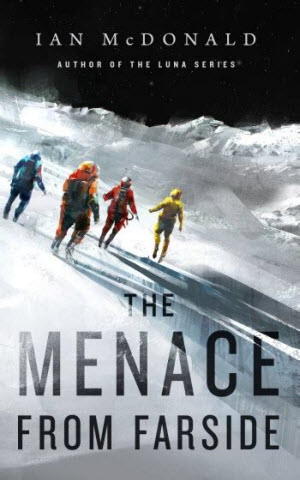