The Lights Go Out in Lychford Paul Cornell’s Lychford series is one of several very successful novella collections produced by Tor.com. They are also probably the most connected to the real world. The stories are set in a small country town in England. Three women, one of whom is the local vicar, battle against supernatural threats. Now it so happens that Paul and his wife, Caroline, live in a small country town in England. She is the local vicar. So Cornell is very much writing what he knows. I sometimes worry what the people of Fairford in Gloucestershire think about these books, and how many have found themselves as minor characters. But Paul and Caroline have not been hounded out of the town yet, so I guess all is well.

The first of our heroes is Lizzy, the vicar, who is rather dubious about the whole magic thing, but has to admit the evidence of her eyes and knows that it is her duty to protect Lychford from Satan and his servants, by whatever means possible. Judith is the local wise woman. She actually can do magic, and indeed has been protecting the town from evil for years. Not that anyone even knows, let alone gives her credit for it. Cornell has created a marvellous portrait of a lonely, ostracised old woman who has become mean and bitter, but is still devoted to her mission of fighting evil. Finally we have Amber, who owns the local witchcraft shop. She is also the only Black person in the town. At the start of the series she can’t do any magic, but Judith reluctantly agrees to mentor her, because not even a witch lives forever.

This setting allows Cornell to explore themes that are very much of the moment in middle England. Book one, Witches of Lychford, is about the attempt by a major supermarket chain to build a huge store in the town, with potentially disastrous consequences for local businesses. Fortunately for Fairford they have enlisted supernatural help, which gives our heroes an excuse to fight them off. Book two, The Lost Child of Lychford, explores the sadly too familiar issue of child abduction, and is set against a background of Lizzy’s frustration over the commercialisation of Christmas. Book three, A Long Day in Lychford, is about Brexit. In the wake of the referendum, Amber is targeted by local racists. This brings her into conflict with Judith who sees her job as keeping the Wrong Sort of People (fairies, demons, etc.) out of the town. All of which leads us to book four.

The Lights Go Out in Lychford is about fake news. A demon comes to town, promising everyone that their greatest wishes can be fulfilled, and setting neighbour against neighbour. She operates mainly through Facebook, which means it is a while before our heroes even notice what she is up to. The story is told against a backdrop of Judith’s increasing struggles with dementia. Amber is finding her aged tutor increasingly difficult to deal with. And what will happen to the town’s defences if Judith’s son, a local policeman, decides that she’s no longer safe at home and needs to be put into care?

I’ve talked about the entire series here because I want you to see how brilliantly Cornell uses his fantasy setting, and very unusual heroes, to deal with hugely important issues in the real world. I mean, who else writes fantasy books about dementia? He uses it really well too. When we have Judith as the point of view character we know that not everything she is seeing is real. Her mind is playing tricks on her. But so is the demon.

I guess the very Englishness of the books may limit their audience somewhat, but there are over 50 million adults in the county and those of them that are fiction readers should all love the Lychford series. The Lights Go Out in Lychford is, I think, the best of the series so far. The ending is magnificent and heart-rending, and produces the sort of coming together that is the exact antithesis of the “we must all accept and celebrate Brexit now” line that the government is pushing. It sets us up for a fascinating climax to the series in Book five. I guess it will be out, as usual, just before Christmas. I’m looking forward to it. 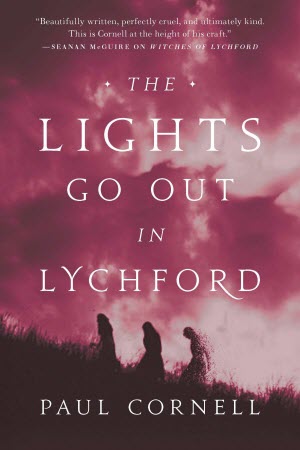