The Ghurkha and the Lord of Tuesday Melek Ahmar, the Lord of Mars, the Red King, the Lord of Tuesday, Most August Rajah of Djinn has been asleep in a coffin in the Himalayas for over 4,000 years. Now he is awake and looking for a good party. But the world he finds himself in is very different than the one in which he was unfortunately bashed over the head while drunk. The humans, it seems, have been busy.

The world has been through a nanotech apocalypse. Those cities that survive are now mini-Utopias, and none more so than Kathmandu. Peace and luxury, however, come at the price of constant vigilance; the sort of vigilance that can only be provided by an AI. In Kathmandu’s case that job falls to Karma. Not only does she keep her inhabitants safe from all of the deadly nanotech plagues with which the planet is still infested; she provides a benign rule based on a points system where citizens can grow wealthy through doing good deeds; or happily live on social security while being merrily but benignly debauched.

The legendary Ghurkha knife fighter, Bhan Gurung, does not live in Kathmandu. No one in the city remembers him now, which is probably just as well given what he has done. Gurung has not forgotten. He still bears a grudge against the city. And the arrival of an incredibly powerful, but rather confused and suggestible, Djinn lord seems like a gift from Heaven.

Hamilcar Pande is the closest that Kathmandu has to a policeman. He doesn’t need to keep law and order. Karma does all of that for him. But it is his job within Central Admin to keep an eye on Karma and ensure that she continues to function correctly. Goodness knows how he would ever tell if something had gone wrong, or how he could do anything about it if he did, but there it is. He has a job, as much as anyone in Kathmandu actually needs one, and he is determined to do it to the best of his ability.

So when two strange and disreputable looking people turn up at the gates of the city demanding entrance, it is to Hamilcar that Karma delegates the job of keeping an eye on them. Because one of them seems impervious to all forms of surveillance.

This is the set-up for a rather wonderful novella from Saad Z. Hossain. He lives in Bangladesh, but thanks to the wonders of the Internet he has been able to sell his work to the Western world, and in this case to Tor.com. I discovered the book because its editor, Jonathan Strahan, had been enthusing about it on The Coode Street Podcast. I know I can rely on Jonathan’s good taste, and in this case my faith in him was more than rewarded.

The Ghurkha and the Lord of Tuesday is many things, which is impressive for a novella. It is, at core, a crime story. There are some murders in it, though the crimes involved are rather more complex than simple killings. It is also a nanotech story, bearing some debt to its forebears — in particular Kathy Goonan’s flower city novels. It is a book about a future society run on reputation points, similar to the concept of Whuffie used in Cory Doctorow’s Down and Out in the Magic Kingdom. It is a story about a world beset by (un)natural disasters, and how humans respond to that. And it is a story about humans seeking to deal with an AI whose workings they cannot hope to understand.

Oh, and it is a book with a couple of comedy Djinn as major characters.

Now if all that strikes you as interesting, and I think that it should, then you will want to be buying a copy of this book and reading it before you submit your Hugo Award ballot for 2019. These days Novella is a very competitive field, but in my view this book absolutely deserves to be a finalist. 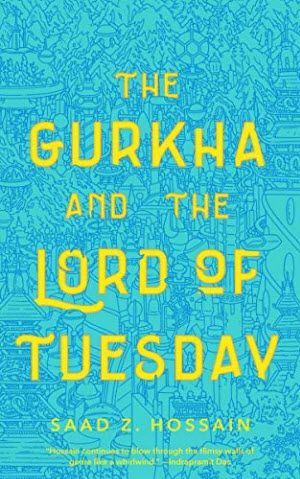 Title: The Gurkha and the Lord of Tuesday
By: Saad Z. Hossain
Publisher: Tor.com
Purchase links:
Amazon UK
Amazon US
See here for information about buying books though Salon Futura