I have been a fan of Elizabeth Knox for some time. I reviewed one of her books back in Emerald City days. But living in New Zealand is not good for a writing career. Going to conventions, or doing book tours, even in Australia, can be very expensive. Knox hasn’t had the support from publishers or readers that she deserves. Her latest novel, The Absolute Book, is available only from a university press in Wellington. Thankfully you can get an ebook, so it is not that expensive to buy if you are OK reading electronically, but you have to know where to look, and why. Fortunately I am here to tell you.

The Absolute Book is the story of Taryn Cornick, the younger daughter of an upper middle-class family in England. Her family used to own a stately home in the Welsh Borders, but that has had to be sold because of upkeep costs. Her father is only a top character actor currently famous for his roles in a trilogy of fantasy movies, and a long-running fantasy TV series. That doesn’t earn enough. Stately homes are expensive.

When Taryn was young her elder sister, Beatrice, was murdered. A man in a car saw her out jogging on a quiet country road and thought that if he knocked her down he could rape her, but he miscalculated and she died from wounds sustained in the impact. At the trial he claimed he had no idea what came over him.

Fast forward now a few years. Taryn is married to a wealthy businessman who can afford a stately home. She is still processing her grief and anger at Bea’s death. On a hunting trip to Canada she meets a woodsman who befriends her. He offers to help her grieving by killing Bea’s murderer when he gets out of prison. It’s a favour he wants to do to help an unhappy young woman. No strings attached.

Fast forward again. The murderer is dead. A young police officer who interviewed Taryn is convinced that she was involved, despite her cast iron alibi. Taryn is newly famous as she has written a successful book about lost libraries: not just Alexandria, far too many have been burned. Meanwhile she is being stalked, and she has started to suffer from mysterious seizures. While in hospital for tests she is visited by a man from MI5. He’s interested in two Arabic-looking men who came to a book signing. Oh yes, says Taryn, the Lovecraft fans. One of them gave me a card with the name Abdul Alhazred on it.

If, at this point, you have no idea what this book is about, don’t worry, I didn’t either. But it will all come clear in due course. What we have, as you can guess from the title, is a book about a book. An apparently very important book. One that people, and beings that are not people, will kill to get hold of. A book that has a very important role to play in a very long-running war.

It is also a book that is heavily steeped in that glorious mash-up of mediaeval Christianity and Celtic myth that is Arthurian legend, and yet it mentions Arthur by name just once. Mostly it just alludes to him, as in this passage.

He recalled the very erudite lawyer he regularly had a drink with explaining to him why the current referendum wasn’t going to devolve into the usual political point-scoring but, instead, produce something extraordinary. ‘[…] No, it’s an almost mythical yearning, as though, if we can only create the right conditions, a stranger might come out of the mist, thrust a sword into a stone, and say, “Whosoever draws forth this blade…”’

So yes, this is a book about the modern world, but it is also a book that is infused with mythology. In particular it connects to myths about idealised otherworlds, and heroes who might come to rescue us from our folly. God is not going to save us. The old fellow has apparently retreated from the world, driven mad by the conflicting demands of his fractious legions of followers. It is down to Arthur, or the Fae, or Odin, or someone like that. Of course you do have to be careful, even with them.

‘We’re hoping the sisters will turn up. We can’t summon them without maybe also summoning the god. Odin is best left out of this. We’re not sure what his intentions are. He’s not himself these days. His head has been turned by many new worshippers. Of the wrong kind.’

All of this mixing of the modern world and mythology sometimes allows very weird things to happen.

Neve frowned at their approach, but greeted each of them by name. Her small party of humans made room. Introductions were exchanged and Taryn found herself sitting one place along from Franz Schubert.

Of course there is much serious in the book as well. It reminded me in particular of two things. The first is Ursula K Le Guin’s legendary short story, “The Ones Who Walk Away From Omelas”. As you doubtless know, the city of Omelas is a utopia with a dark secret. The vast majority of citizens lead idyllic lives, but the price of this is that in a dungeon below the city a young child is being continually tortured. In Le Guin’s story, some people choose to leave the city rather than have their happiness depend on such horror. Many other writers have had their own takes on the moral conundrum since.

Here’s what Knox asked. Imagine that you, yes You, had the power to stop it all. If you were willing to give up your own life, and submit to eternal damnation, in return for which the utopia of Omelas would continue with no child ever being harmed again, would you do it?

The other thing that came to mind is that this is something of a Sheri Tepper novel. Now I have had some fairly bad things to say about Tepper in the past, but that’s because her solutions to the world’s problems tend to come from a position of arrogance and disdain for mankind. Tepper presents mankind (and she means MANkind) as a failed species that needs to be taken in hand and disciplined. Knox, I think, comes from a kinder place. Yes, we human are a mess, and we seem to be incapable of fixing the problems we have created. What we need, however, is not a stern parent who will stop us from ever being bad again, but supportive parents who will teach us to love.

It is a nice thought, and this is a lovely book. Unfortunately, in the world outside of the book, no one is going to come to save us. 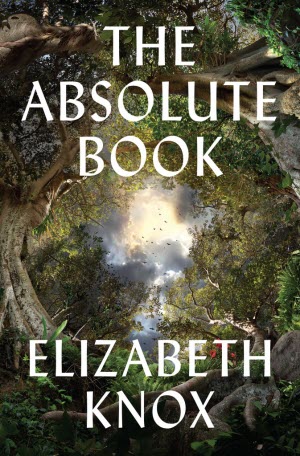