Shadows of the Short Days

Well, that was grim. I’d hesitate to describe this book at Grimdark because that suggests big mediaeval battles in which everyone dies. Lots of people do die in Shadows of the Short Days, but mainly because they are innocent bystanders. Besides, the book is absolutely not mediaeval fantasy; it is more like a steampunk political thriller.

Let’s start with some background. Shadows of the Short Days is book 1 of the Hrímland saga by Icelandic author, Alexander Dan Vilhjálmsson. The book blurb says that it was translated by the author, so presumably it was published first in Icelandic, though there’s nothing to indicate that on the copyright page. The English is perfectly readable, but the text does include a lot of Icelandic (or possibly Old Norse) words, mostly proper nouns. The book begins with a primer on the language explaining how to pronounce letters such as þ and ð. If you are into language, the book is probably worth getting for this alone. If you are not, it will seem a very strange way to start a novel.

The island of Hrímland exists somewhere in the north of the Atlantean Ocean. Not long in the past it was occupied by the Kalmar Commonwealth (Denmark?), ostensibly to protect it during a major European war, but mainly because the island is vital to Kalmar’s naval domination of the northern oceans. Hrímland is now ruthlessly exploited by Kalmar, and its unique non-human races are horribly oppressed. So Shadows of the Short Days is a story of struggle against Fascism. Funny how that seems popular these days.

Unlike The Dark Crystal: The Age of Resistance, however, there is nothing cute about this book. In some ways it is like getting a view inside the minds of the Brotherhood of Evil Mutants. Our heroine, Garún, is a bit like the Scarlet Witch. She’s committed to the cause, but largely unaware of how scary her powers are to ordinary humans. She’s a blendingur, meaning that she’s half-human, half-huldufólk (i.e. half-fae). As the book goes on, she becomes more and more committed to dangerous direct action, and also becomes more and more consumed by hatred.

That would make Sæmundur Magneto, except that he’s not actually the leader of the revolutionaries, and he’s much more like Victor von Doom. He’s smart, very smart, and most definitely the best sorcerer in Hrímland. His tutors at the Royal University of Reykjavík were far too timid, and they expelled him for engaging in forbidden practices, but he’ll show them. He’ll show them all!!!

Both Garún and Sæmundur use their powers to help the revolutionaries, but it doesn’t go well, for anyone. There are people in Reykjavík who are much smarter than idealistic young activists. Some of them are not remotely human.

Which brings me to one of the best parts of the book, the wonderful collection of brings drawn from Norse mythology. In addition to the huldufólk we have a couple of other non-human races. The marbendlar are an aquatic species who would utterly terrify poor Howard Lovecraft if he were to encounter them. Much more terrifying are the náskári, the raven folk. These three-legged winged beings are ferocious warriors who seem to live for fighting. Then there are the Seiðskratti, bird-masked sorcerers in the service of the authorities. For reasons I didn’t notice explained, they use non-binary pronouns. That seems entirely appropriate to me, because seiðr is women’s magic, and it is Óðinn’s use of seiðr that gives Loki an excuse to call the King of the Æsir effeminate in the Lokasenna.

Overall there is much of interest in this book, and I’m delighted to see an Icelandic author being published in English. There’s no way that a British or American writer could have produced something this heavily rooted in Norse mythology without living in the Nordic countries for decades and studying hard. Having said that, this isn’t a book that I can imagine people enjoying reading. It is relentlessly grim, and by the end there’s little likeable, or even redeemable, about either of the main characters.

Content note: this book contains a particularly cruel and gruesome murder of an innocent cat. 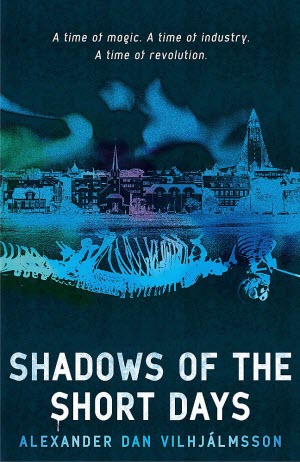