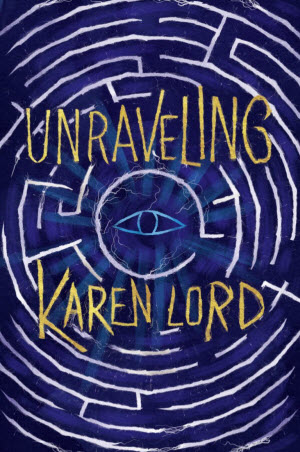 There are some books that I can race through very quickly and write reviews of immediately. There are others where I have to think a lot while reading them and then let those thoughts marinate for a while before saying anything. Books by Karen Lord tend to be in the latter category.

Let’s do the easy bits first. Ostensibly Unravelling is a sequel to Redemption in Indigo. Paama does make a few brief appearances in it. But mainly this is a book about her sons: Yao and Ajit, or Chance and Trickster as they are sometimes known.

The book is also a murder mystery. It stars Miranda Ecouvo, a brilliant lawyer in a city somewhere. As the story opens, Miranda has just witnessed the end of a very high-profile case. She has finally seen the notorious serial killer, Walther Grey, put behind bars. But Miranda is not entirely convinced that the case is fully solved. She has a sneaking suspicion that Grey did not act alone. He just didn’t seem capable of committing those crimes by himself. And if he did have an accomplice, that person must be still at large.

Musing over these issues, Miranda steps into a road to cross it, and is run down by a bus.

Or is she? As far as Miranda is concerned, she was pulled out of the path of the bus by a young man who calls himself Chance. She immediately realises that he’s some sort of supernatural being, and together they begin to work on the case.

So what really happened to Miranda? Is she dead? Is she lying unconscious in a hospital bed and dreaming all of this? Or is she really still walking around and working? Oh, and was the accident, if it happened, actually an accident, or has someone decided that Miranda needs to be taken out?

One of the reasons that we don’t know is the way in which Chance and his brother set about helping Miranda solve her case. They can take her back in time to observe Grey’s victims. They can’t go everywhere in time, which suggests they are being opposed. But they can sometimes change things. Can you say, “time war”?

So what is this book? Well partly it is a fantasy novel featuring supernatural beings. We may remember that Redemption in Indigo was based, in part on Senegalese folk tales. And one character is called Trickster and sometimes takes the form of a spider. But one of the other supernatural beings in the story is the Archangel Uriel.

Partly the book is about class. Miranda and her colleagues are Freemen of the city. They own property there. They have rights. Grey’s victims were itinerant workers who have almost no rights. Investigating the case makes Miranda painfully aware of her privilege.

And partly this is a book about gender. People who get away with murder are often powerful men. Miranda’s boss, Khabir, is also a powerful man. He has access to communities within the city that are closed to her. But will he be prepared to risk his social position by exposing a member of his elite group?

By now you will hopefully have got the idea that Unravelling is a very complicated book, and one that will reward careful reading. I would expect nothing less from Karen.

For me, what I want to do most right now is sit down with Karen over a glass or two of rum and discuss the place of labyrinths in African & Caribbean mythology.