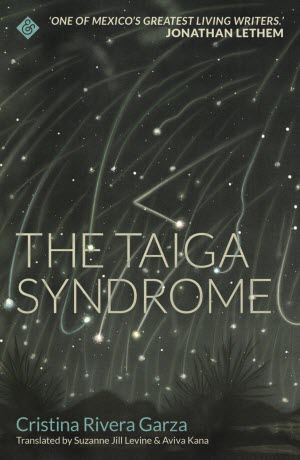 It appears that this is a month for weirdly experimental fiction. If you thought that Jeff VanderMeer’s Dead Astronauts was odd, well you ain’t seen nothing yet.

The Taiga Syndrome is a novella by Cristina Rivera Garza, hailed as one of Mexico’s greatest living writers (by Jonathan Lethem, no less, in the front cover blurb). It is translated into English by Suzanne Jill Levine and Aviva Kana. I don’t envy them the task of maintaining the deeply surrealist feel of the prose in a new language. There are a couple of points where the text makes reference to rugby. I have no idea whether this is in the original, but it works. Translation is often an exercise in creativity.

The narrator of the book is a woman detective from an un-named country. She apparently has a reputation for taking on strange cases. Mostly she has failed to solve them. Recently she has been offered a private commission by a rich man whose wife has run off with a new lover. It was out of the blue, he says, completely unexpected. They have headed off around the world, but she keeps sending me postcards from wherever they end up. I’m sure that she wants to be found. I want you to bring her home.

Well, that was me paraphrasing the plot, not direct quotes, but you get the idea. The problem is the place where the missing lovers have gone. They were last heard from in the Taiga, the region of snow forest that circles the northern hemisphere of our planet. They are probably in Siberia, given the issues that our detective has with culture and language. She has to hire a translator, and that adds an additional layer of unreliability to the narrative.

The story is interlaced with references to Hansel & Gretel, and to Red Riding Hood, both stories of young people who get lost in the woods, for lost in the woods is exactly where the runaway lovers and the detective end up.

Once you are lost, nothing is quite what it seems. The normal rules of the world no longer apply. Time itself may seem to run differently. You will see things that you can’t quite believe. They will frighten you.

On the other hand, maybe being lost in the woods is exactly what some people want in their lives. Who can tell?

The Taiga Syndrome was published late this year in the UK, but there was a US edition last year and it won the Novella category in the Shirley Jackson Awards. I can see why, though I would class it as merely very weird, not horrific in any way. Don’t bother with it if you only want books that give you easy answers. But if you want, or need, to get lost in the woods this might be the very thing.