The Sinister Mystery of the Mesmerizing Girl 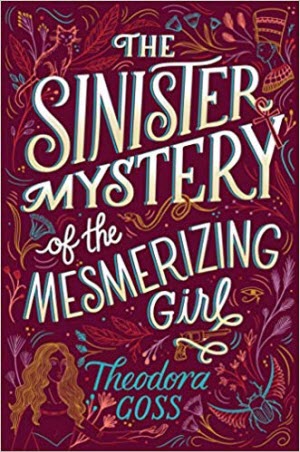 I have great enjoyed the previous two volumes in Theodora Goss’s Athena Club series, and immediately pounced upon the new one, The Sinister Mystery of the Mesmerizing Girl, as soon as it became available. It follows directly on from European Travel for the Monstrous Gentlewoman. Indeed, some of the Club’s members are still in Budapest when the book opens. The majority, however, have returned to Mary Jekyll’s London home, only to be told by their distraught housekeeper, Mrs. Poole, that Alice, the kitchen maid, has been abducted in the middle of the night by persons unknown.

While the first two books use elements from well-known stories — Jack the Ripper and Dracula — this one uses a much less popular work, Bram Stoker’s The Jewel of the Seven Stars. It is a story about archaeologists finding out that the magic of the ancient Egyptians is rather too much for them, and therefore it is the ancestor of all of those mummy movies. Goss cleverly ties this into the story of Ayesha, the immortal queen from H Rider Haggard’s She. I won’t say too much more about that because some of you may not have read European Travels yet.

What I will say is that neither Stoker nor Haggard were experts on Egyptian history. Of course we know a lot more about it now than when they were writing, but it is still a bit of a shame that Goss is tied into their fictional ancient Egypt and therefore can’t write about the real queendom of Meroë and the amazing Amanirenas who was Kandake there at exactly the time some of the events in Goss’s book take place.

On the other hand, the Temple of Isis at Philae is a very real and beautiful place. Bettany Hughes featured it in her most recent documentary series about Egypt. It had to be moved from its original location due to the construction of the Aswan Dam, but that was long after the events of Goss’s book, so we never get to find out what Ayesha thinks of that.

Talking of Ayesha, at one point she gets to explain the myth of Isis and Osiris to some of the modern-day characters. She says,

Isis searched for his body parts, keening with grief like a falcon. Her tears flooded the Nile, which is why the Nile floods to this day. When she had found all of the parts of his body, she assembled the pieces and brought Osiris back to life with herbs and spells.

Oh, Ayesha, you know what Isis did. Since when did you become such a prim, Victorian lady?

The Egyptian history connection makes the book pure candy for me, and of course part of the action has to happen in the British Museum. Also the main British characters from Stoker’s novel, Professor Trelawny and his daughter, Margaret, live in Cornwall. Kyllion Cove is a not a real place, but I suspect that Stoker got the idea from Mullion Cove on the Lizard Peninsula. Part of the action in Goss’s book takes place on Mount St. Michael, and I spent a fair amount of time during my childhood on Marazion beach so I know the location well. Goss is again limited by the fictional geography of Stoker’s Cornwall, but otherwise does a fine job.

Much more relevant to the majority of readers will be the fact that this book features the villainous Professor Moriarty (who very obviously would have survived Reichenbach Falls, just as Holmes did). He turns out to be even more unpleasant than Dr. Watson let on. Here he is giving a speech to a group of supporters he has gathered for his latest scheme.

Once we are in power, we will close our borders to the unwashed masses that pollute our cities. England for Englishmen! We will administer our empire with a firmer hand – no more rebellions, or at least not one that go unpunished. No more concessions to native populations who have no idea what is good for them. I assure you that in public policy, mercy is an overrated virtue.

I’m rather in two minds about this. On the one hand presenting Moriarty as a sort of Pound Shop Jacob Rees Mogg seems a terrible waste of one of the great villains of history. On the other, the Athena Club stories are all about gender-flipping Victorian literature, and because of this Goss is honour-bound to show that the female is far more deadly than the male.

Sadly it seems that this is the last book in the series, at least for now. I still want to read the story about Prince Rupert of Hentzau. I’m also very worried about Justine Frankenstein who has fallen under the influence of the mysterious Mr. Dorian Gray. However, if Goss wants a break so that she can write something different that’s fine by me. She is a very good writer, and I’d be very happy to buy whatever she comes up with next. In the meantime, here are a few things about the Athena Club stories that I love.

Obviously the whole League of Extraordinary Daughters of Villainous Gentlemen thing was an idea of genius. I wish I’d thought of it.

The books do capture the essence of the Victorian thriller rather well. Because I’ve read some of her other work, I know that Goss is an incredibly elegant and atmospheric writer. However, Catherine Moreau, the presumed author of the Athena Club Mysteries, has a particular style and Goss sticks to it throughout these books.

Finally, while I know that some readers have been irritated by the device of having the characters comment in the text on what Moreau is writing, I rather like it. It isn’t just comedy. It provides further opportunities for character development, and for foreshadowing future events. I can’t, off the top of my head, think of any other book that does this. Probably there is one, but if not I hereby propose that it be called The Goss Technique in parallel with the popular Dos Passos Technique of putting extracts from fictional news coverage into a story.