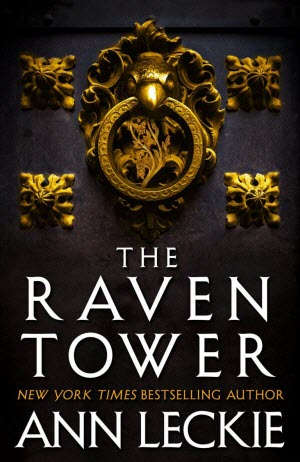 OK, let’s get the awkward thing out of the way first. This is a fantasy novel written by a science fiction writer. That’s not to say it is a bad book. It is just that if you have certain expectations of a fantasy novel to do with it having a sense of the mysterious, the ethereal, the spiritual, then you will probably be disappointed. If instead you are happy to read a well-written book that speculates about the relationship between gods and men, you will be perfectly content with what Ann Leckie has to offer in The Raven Tower.

The book has two parallel strands: one about gods, and one about men. The former takes place over thousands of years, though it eventually focuses in on a prolonged war between two rival groups of gods and their worshippers. The latter takes place over a matter of days, many human generations after the war in the other strand has finished.

The gods are very real. They may be aliens. One of them, at least, arrives from space on a meteorite. They have powers, which they don’t entirely understand, that allow then to change the world by speaking it so. They can inhabit a variety of forms and, once humans arrive on the planet, they learn to communicate with them.

It turns out that the powers of the gods are fed by worship, particularly sacrifice. Doing things that affect the world drains those powers. It is a delicate balance for an ambitious god. You should never promise your worshippers more than you think you can get back from them, or you will find that you won’t be able to deliver and they will desert you.

The story focuses primarily on two gods. The main character is The Strength and Patience of the Hill, who takes the form of a very large stone. He’s not ambitious as far as gods go, but he is smart, stubborn, and very old. His friend, The Myriad, is the god who arrived on the meteorite. She takes the form of a swarm of mosquitoes (her original worshippers were reindeer herders), which naturally led me to distrust everything she said.

Humans have a different issue with godly powers. Having a god that you can communicate with effectively can be very useful. Gods can do amazing things for you. But gods do not always communicate clearly. Sometimes they don’t communicate at all. For an ambitious ruler, it can be much better to have a god who doesn’t do much, and whose utterances you, and only you, get to interpret.

The human story concerns the country of Iraden, ruled over by a god called The Raven and his human mouthpiece, The Lease. Ravens are long-lived birds, but they don’t live as long as humans. The deal is that while he is Lease, a human is protected by The Raven and speaks for the god; but when the current Instrument of the Raven, its mortal bird form, dies, then the Lease must give up his own life to the god and allow the new Instrument to bond with a new Lease.

As our story opens, Lord Mawat, the Heir to the Lease, is riding home to the capital city of Vastai. Word has reached him that the current Instrument is dying. He expects his father to follow suit, and that he will become the new Lease. However, when he arrives at Vastai, things are not as he expected.

The human story, then, is about how a corrupt and ambitious individual usurped the traditional process and installed himself as ruler. While the people might be upset about this, the rest of the political class are too wedded to the sanctity of the process to want to admit than it could be usurped. Besides, the new ruler might do some of them a good turn. He’s the man in power. It pays to suck up to him. Even if it turns out that he is in the pay of a foreign country.

I can’t imagine what real world events Leckie might be writing about here, can you?

Mawat, however, is not the hero of our story. That honor goes to his aide, Eolo, who is a trans man.

I am, I guess, expected to have an opinion on this. Especially as I have recently recorded a podcast for Breaking the Glass Slipper on the very subject of trans characters in science fiction and fantasy. Leckie, I think, has taken a fair but real-world approach to the issue. Like Claude in Kate Heartfield’s Armed in Her Fashion (which is an excellent book that I really should write about), Eolo is bound by the strictures of life in a mediaeval society. Mawat, when he is expecting to become Lease, offers to petition The Raven to transform Eolo’s body, but that’s very scary prospect that the young man never gets the chance to think through.

The consequence of this authorial choice is that there will be circumstances where Eolo’s secret (and he does keep it a secret) is in danger of being exposed. Mawat knows, and doesn’t care. He values Eolo for his bravery, loyalty and wisdom. Most other people don’t know, and might react badly if they did. This makes Eolo’s life dangerous, but Leckie never puts him in difficult situations for purposes of shock value, or voyeurism, or comedy. What she does do is make him the moral center of the story. Given the set-up of the book, I don’t think we can ask for more. Some people, I’m sure, would have preferred a different set-up.

The fact that Eolo is the smartest of a largely dumb bunch of humans is not lost on The Strength and Patience of the Hill. He narrates Eolo’s story as well as his own. That’s the common thread that will draw the two strands of the narrative together at the end. I’m not going to say anything about the end, except that I was very pleased with it.

I will be interested to see how The Raven Tower is received. I suspect that some readers of Leckie’s superb science fiction will be turned off by the fantasy setting. I also expect that some fantasy fans will complain that it doesn’t read like fantasy. It is certainly an interesting experiment, and one I enjoyed reading.