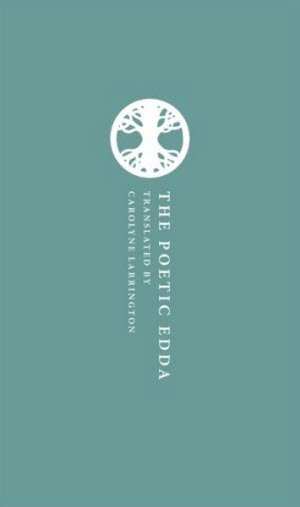 This is not a new book. It was first published in 2014. It is, however, a gorgeous new edition which Oxford University Press have presumably issued to cash in on the current popularity of Norse myth.

While I am very familiar with the characters of Norse myth, and some of the stories, I am much less familiar with the source texts. Much of what we know come from Snorri Sturluson’s Prose Edda. This book, however, is a translation of The Poetic Edda, a collection of poems many of which are only known from a single source. The Codex Regius is a collection of poems first transcribed sometime in the 1270s, but obviously much older. Only a single copy of the whole collection exists, currently held safely in Reykjavik. By such slender threads are our knowledge of the stories of pre-literate cultures suspended.

The contents cover a wide range of Nordic/Germanic myth, from the creation of mankind to Ragnarok, and the story cycle later used by Wagner as the basis for his Ring Cycle. The stories have also provided much inspiration for writers such as Tolkien, Lewis, Alan Garner, and of course Stan Lee. Whoever wrote these stories down has a literary legacy that is perhaps even greater than that of Homer.

The translations are by Carolyne Larrington who is Professor of Mediaeval European Literature at Oxford. She knows her stuff, and has produced a very readable text. I’m therefore going to apologise in advance for zeroing in on some very specialist areas of translation which are the only ones where I have any expertise, and which Prof. Larrington might have tackled differently were she doing the translations today.

In reading through the poems I noticed the words “pervert” and “perverse” being used several times, generally with reference to Loki. These are clearly judgemental terms, and consequently I wondered what they meant within Norse culture, and how other translators had tackled them.

The first story I looked at was the “Thrymskvida”. In this story the Giant, Thrym has stolen Thor’s hammer and demands Freyja for his bride as the price of returning it. The gods trick Thrym by disguising Thor as Freyja and sending Loki with him to talk the foolish Giant into believing the masquerade.

In Prof. Larrington’s translation, after Heimdall (not Loki) has suggested the deception, Thor says:

“The Æsir will call me perverse,
If I let you tie a bridal headdress on me.”

In the original Norse the text (at least from this source) is:

The key word here is “argan”. It comes from a Norse word that, as far as I’m aware, means a man who may be effeminate and who has sex with other men. So Thor could be coming about as close as is possible in Old Norse to saying, “I can’t do that, people will think I’m gay.” Obviously the Vikings didn’t have the social concept of the homosexual (which is a 19th Century invention), but the meaning isn’t that far different.

The other poem I looked at is the “Lokasenna”, a poem in which Loki gets into a massive quarrel with the other gods. In this poem Thor regularly addresses Loki as “Þegi þú”, which Prof. Larrington has translated as “Perverse one” and the translator at voluspa.org renders as “Unmanly one”.

Þegi is a different word from the one I’m used to for indicating a queer man, but voluspa.org uses “unmanly” for “argan” as well, so presumably there are similar connotations.

Earlier in the poem, Odin and Loki trade insults. Both use the formulation, “ok hugða ek þat args aðal”. Odin is referring to a time that Loki spent as a woman, and gave birth to children. Loki counters by accusing Odin of practicing síða, a form of sorcery that is generally the exclusive preserve of women (and often translated as “witchcraft”).

Prof. Larrington uses the rather lengthy formulation, “And that I thought the hallmark of a pervert”. On voluspa.org the translation is, “Unmanly thy soul must seem”. In both cases the key word is “args” which is from the same root as “argan” above. Here “effeminate” seems to me a more natural translation.

There are two points I want to make here. Firstly I don’t think we really know whether the Vikings thought that being argr was perverted or not. Describing Loki as “perverse” seems entirely justified, but that probably isn’t the meaning of the English word that is being implied by “Þegi”.

The other is that issues of gender and sexuality are a key part of Norse myth and Loki in particular is a very queer character. All these people who claim that queer folk didn’t exist in the past are talking nonsense.