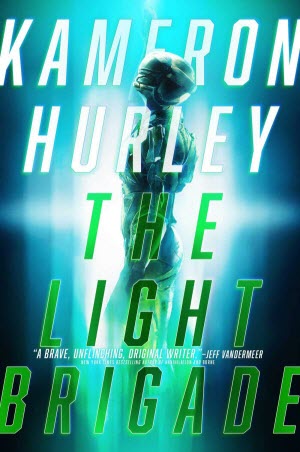 Time travel is very much the thing these days, it seems. I loved Ian McDonald’s Time Was, and I recently read a very different time-crossed love story in Amal El-Mohtar & Max Gladstone’s This is How You Lose the Time War. I loved that one too. Kameron Hurley’s time travel story is a very different beast again, but also well worth reading.

The Light Brigade knows where it has come from. The Forever War is a type of time travel story, in that the soldiers come back from each tour of duty to find that decades have passed on Earth since they left, thanks to the relativistic effects of interplanetary travel. The Light Brigade, however, owes far more to Starship Troopers, even down to the cute reveal of the lead character’s first name towards the end.

Dietz, which is how our hero is known in the Corporate Corps, lives in a near future world in which Earth is dominated by six giant corporations: the Big Six, as they are known. The Moon and Mars have been colonised, but the Moon has suffered something of an accident and the Martians have gone full-on Communist and therefore Must Be Destroyed.

(“Communist” here meaning that they don’t want to work for the Big Six.)

Life under the Corporations is not great, especially if, like Dietz, you are not a citizen/employee. However, the Martians have just wiped out the entire city of São Paulo, including what remains of Dietz’s family. You can’t let that sort of thing stand. Someone has to join up and get revenge.

From here on it is very much Starship Troopers. Dietz and several others join up to fight back against Mars. They get Basic Training and Boot Camp. And then they are ready to be shipped out on their first mission. They are ready for their first drop.

But in The Light Brigade a drop means something very different. There is no jumping out of spacecraft. The Corporate Corps has developed a primitive form of the Star Trek transporter. Soldiers are dropped literally into the middle of the action. And sometimes, because the technology is a bit experimental, into the middle of walls. Occasionally too, some troopers arrive with their limbs in the wrong places. But the really weird thing is that some troopers end up somewhen else entirely.

Naturally no one is allowed to talk about this. Troopers who experience temporal dissociation are sent for psychiatric realignment, which mostly works because they are too confused by the experience to understand what has happened to them. Eventually, however, some of these time-traveling troopers manage to work it out. They also realise that they know far more about how the war will progress than their senior officers. In war, that sort of information is invaluable.

I should note that the cast of The Light Brigade is anything but white men. The platoon that Dietz is part of comes from Latin America. There are a lot of women in it. Dietz has sex with both men and women during the course of the story. None of this is terribly remarkable in the world of the book. The villain of the story is a blonde woman called Norberg who dresses in white. She’s a very obvious Ice Maiden who, in another world, might be fronting current affairs programs for Faux News.

There are also some fairly extensive political sections in the book. I think that Heinlein would have enjoyed engaging with the ideas being presented, even if he didn’t entirely agree with them.

All in all, this is a very impressive book which very much knows its history and wants to engage with it. I think that perhaps Dietz’s transformation from confused squaddie to someone who is able to turn the situation to their advantage happens a little quickly, but that’s a minor quibble. It won’t appeal to the sort of people who think that “freedom” means having bigger jackboots than everyone else, but the mere fact that it is written by a woman would have put them off so we don’t need to worry about what they think. Everyone else will, I think, be very pleased with this intelligent addition to the great conversation of science fiction.