The Haunting of Tram Car 015 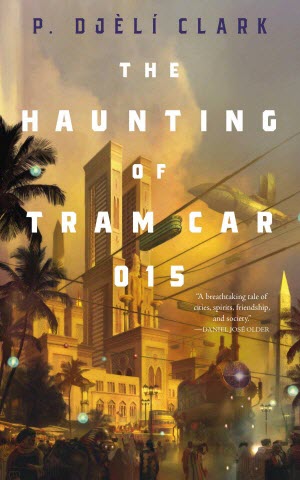 P Djèlí Clark is rapidly becoming one of my favorite writers. His The Black God’s Drums was one of the stand-out novellas of 2018. It is set in New Orleans and has airship pirates, plus nuns with guns and chemistry labs. I mean, nuns with guns is quite terrifying enough; give them chemistry labs too and there’s no telling what they might get up to.

Clark’s new novella, The Haunting of Tram Car 015, is the second story set in his steampunk Cairo universe. When the Sufi mystic, Al-Jahiz, found a way into the Kaf, the realm of the djinn, Egypt quickly became the world’s foremost technomagical society. The Egyptians’ abilities quickly outstripped those of the colonialist British, French, Germans and Italians, all of whom were swiftly sent packing. But nothing comes without a price. Cairenes have a new saying, “Thanks, Al-Jahiz”, that they wheel out whenever some feature of sharing their world with the djinn proves less than utopian. And there is a new organisation, the Ministry of Alchemy, Enchantments and Supernatural Entities, whose job it is to investigate magical crimes.

The series began with “A Dead Djinn in Cairo”, which was published on Tor.com. It introduces us to Fatma el-Sha’arawi, one of the few women agents in the Ministry and possibly its most flamboyant. Fatma has a preference for British men’s suits and carries an impressive black steel walking cane. Think Emma Peel and John Steed in one body. She’s not to be messed with.

The story also points out that the reintroduction of magic to society has resulted in an increased interest in traditional Egyptian religion. We meet the mysterious Siti, who has, “more of Sekhmet in her than most”.

The new novel uses that classic formula of police procedurals, the older, grumpy detective burdened with a young, naïve and over-educated partner. Agent Hamed Nasr was at the Academy with Fatma. His partner, Agent Onsi Youssef, read Literature at Oxford and knows as much about Shakespeare as he does about mediaeval Arabic manuscripts. He’s also a Copt, the ancient Christian sect that is common in Northeast Africa.

Hamed and Onsi are sent to Rameses Station, the main terminus of the busy djinn-powered aerial tram network that keeps Cairo moving. One of the trams has become infested with a malevolent spirit that has attacked passengers. Clearly it needs to be removed as quickly as possible, but the process turns out to be much more complicated than Hamed anticipated.

The story is told against the backdrop of tumultuous political events in Cairo. It is early in the 20th Century, and like other modern, developed countries Egypt has been gripped by Suffragette fever. The women of Cairo might mostly wear hijabs, but they want the vote just as badly as their bonnet-clad European sisters. They have adopted the woman pharaoh, Hatshepsut, as the symbol of their struggle. Hamed is not sure what to make of all the fuss, but Onsi thinks it is all very exciting.

The case is solved eventually, as it must be, but not without a certain amount of danger to the good citizens of Cairo, not to mention our heroic investigators. A haunted tram car is a dangerous thing. Thankfully they have the aid of Siti, who looks like being a regular feature of these stories. This is probably the point where I should note that Siti is from Nubia, a country that not only preserved Egyptian religion longer after the mother country had been overrun by Greeks and Romans, but also was ruled by some of the most badass warrior queens in human history. I’m pretty sure that Clark knows this.

Another neat element of worldbuilding in the stories is the presence of the Mahdist Revolutionary People’s Republic. That, of course, is a reference to Muhammad Ahmad bin Abd Allah, the Nubian religious leader known as The Mahdi who, in our world, led a successful revolt against British rule in the Sudan in the later 19th Century. It was the only successful revolt by a colonised people in the history of the British Empire. In Clark’s world (can you tell I’ve been waiting to get that phrase in) Sudan is presumably also a technomagical society and therefore far more able to make its way in the world. Comrade Lenin and his friends, who are presumably still fighting a civil war, are probably looking on jealously.

As an extra bonus, the story introduced me to the tradition of Zār, an exorcism ritual common in Northeast Africa. I’m a little disappointed that there was no mention of the mangour, a musical instrument made of a leather belt sewn with goat hooves, but the image of the stuffy Hamed trying to play drums and being told, “You keep rhythm like an Englishman!” more than made up for it. Interestingly some sources claim that the Zār cult provided a haven for women and effeminate men in the rather misogynist and homophobic Sudanese state (that’s in our world, I have no idea what Clark’s Mahdists think about queer folks).

Clark’s Cairene stories combine the fun adventure typical of steampunk with a fascinating glimpse of a sophisticated Egyptian society. I should note that Clark himself is from Trinidad, not Egypt, but he knows far more about his setting than I do so I’m prepared to take it on faith that he’s doing a decent job. Now what I want is a novel. Someone commission one, please. Hello, Tor? Diana?