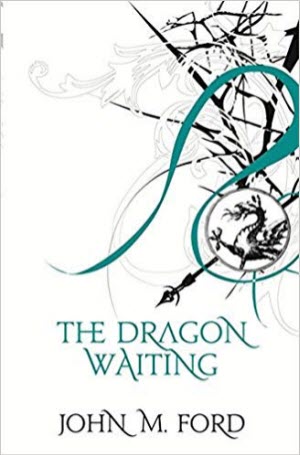 Back in November, SF&F Twitter was all abuzz with the news that Beth Meacham of Tor had done a deal with the estate of the late John M Ford. Many of you could have been forgiven for saying, “who?”, and wondering why the likes of Patrick Nielsen Hayden, Neil Gaiman and Roz Kaveney were so excited. Ford is most famous for a book called The Dragon Waiting, which won the World Fantasy Award in 1984. For historical context, that’s the year before Neuromancer won the Hugo. Someone born in that year would be in their mid-thirties now.

Ford died in 2006. Click through on the link above for the full story of how his literary estate became lost, and how it was recovered. It is a great story in itself, and also gives a real sense of how loved Ford was by his peers.

For additional context, the other novels on the World Fantasy short list that year included George Martin’s Armageddon Rag, Stephen King’s Pet Sematary, and RA McEvoy’s Tea With the Black Dragon (the only cross-over with the Hugo, which was won by David Brin’s Startide Rising). That’s excellent company to be in.

This is also long before Emerald City. I wasn’t reading a huge amount of SF&F in ’84, and was generally only up to date when Marc Gascoigne thrust a book in my face and told me to read it. So despite Roz keeping telling me that Ford was the best of us, I’d never actually read anything by him. But I did have a copy of The Dragon Waiting, so I thought I would give it a look over to see what all the fuss was about. And, of course, to see if the Suck Fairy had visited the poor book.

The opening chapters introduce us to three of our major characters. Hywel Peredur is a young Welsh boy who turns out to have a talent for magic and goes off to Byzantium to learn how to use it properly. Dimitrios Ducas is the son of a Byzantine nobleman who is murdered on the orders of the Emperor for that classic Roman crime of becoming too popular with his soldiers and the people he is governing. Cynthia Ricci is the daughter and heir of the best doctor in Florence. Her father’s patients include Lorenzo di Medici himself, but Vittorio Ricci has become a victim of the plotting of Duke Sforza of Milan.

So far, so conventional, perhaps. Good conventional. We have three characters brilliantly drawn in separate short stories, each one given an encounter that will be a defining feature of their lives. But not all is as it seems. After all, Hywel can actually do magic. The province that Dimi’s father governs for the Emperor of Byzantium is called Gaul. And Duke Sforza is a vampire.

What Ford gives us is a complex and strange alternate history. He has the depth of historical research that you might expect from Guy Gavriel Kay; the devious political scheming of Dorothy Dunnett; and the talent for weaving in historical characters that Kim Newman would later use to such great effect in Anno Dracula.

All of this is eventually put to use to tell the story of the latter part of the Wars of the Roses. Edward IV is on the throne. George, Duke of Clarence, has been politically stupid once too often. Richard of Gloucester is doing his best to serve his eldest brother by keeping the Scots at bay. Hywel, by now a well-known and trusted advisor of the Yorkists, is a friend to the mother of this brood, Cicely Neville. Dimi is now a soldier of fortune. As for Cynthia, a competent surgeon is always in great demand; as is our fourth major character, the artillery engineer, Gregory von Bayern. But the tides of history are flowing, driven, as always, by Byzantine scheming. If the previous sections of the book have told us anything, it is that the efforts of individuals to stand against those tides are generally futile, and often fatal.

One of the things that stood out to me about the book is how it is about propaganda. The Byzantine plot to put their man on the throne of England has two main thrusts. One is the assassination of key figures. The other is the spread of unfavourable stories about the Yorkists to turn the population against them. There’s also some very devious manipulation to create incidents that will give credence to those stories. Fake news is nothing new.

The Suck Fairy, I’m pleased to say, has given this book a very light touch. Cynthia, as one of the main characters, has a very important role to play and a great deal of agency. There is brief mention of a teenage gay relationship towards the end of the book, and this is taken as entirely natural and commonplace by the middle-aged knights discussing it. If I have one regret it is that the worship of Cybele is still important to the Byzantines and there is no mention of the Galli. There could easily have been trans people in the book, but there weren’t.

Oh, did I forget to mention that in the world of the book Christianity is still a minor cult among the many that were popular in Rome? Several of the knights, including Dimi, are proud devotees of Mithras, while Cynthia follows the path of Athena.

All in all, I was very impressed. The book is a little episodic because it has a lot of time to cover, but most readers will be OK with that. I found the description of the battle of Bosworth at the end a little hard to follow. However, these are minor complaints. From next year Tor will be producing new editions of some of Ford’s novels, starting with The Dragon Waiting. They might be old, but if they are all like this one then they are very well worth checking out.

“As Vortigern, king of the Britons, was sitting upon the bank of the drained pond, the two dragons, one of which was white, the other red, came forth, and approaching one another, began a terrible fight, and cast forth fire with their breath.” — from “The Prophecy of Merlin” in Geoffrey of Monmouth’s The History of the Kings of Britain.