The City in the Middle of the Night 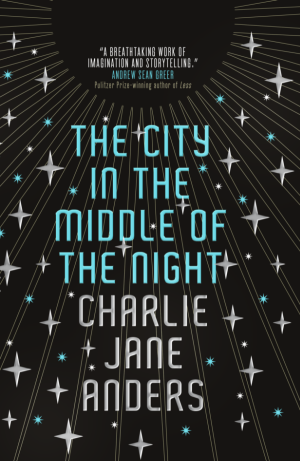 You probably know by now that Charlie Jane Anders’ new novel, The City in the Middle of the Night, is set on a tidally locked planet. That is, the planet always presents the same side to its sun, just as our moon does to us, resulting in one side that it always day and another that is always night. Human settlers have to reside in the equatorial zone.

If you are expecting the book to contain a lot of science about such planets, you will be disappointed. I’m sure that Charlie Jane has done the research, but she hasn’t dumped it all into the book. It is not central to the story. Like me, you may have questions, though mine are more sociological and biological than to do with physics and geology. I’m wondering how, given how stupid and murderous the colonists seem to be, that they have survived this long. Surely they would have wiped each other out long ago.

I’m also wondering, as I always do in the case of planets inhabited by large numbers of Giant Murder Beasts, what the food chain looks like. There are other animals, because they get mentioned, but they don’t seem sufficient to sustain the large carnivores. The giant squid that live in the Sea of Murder must eat something when they can’t find a tasty tinned snack of stupid humans trying to cross the ice in armoured personnel carriers.

But, as I said, these things are not what the book is about. Firstly it is about the two main cities on the planet of January: Xiosphant and Argelo. The former is rigidly authoritarian and conservative, though probably Socialist in a way because all the means of production seems to be owned by the state. The latter is an “anything goes” sort of place, which means that you can do anything you want as long as you don’t upset one of the important families, who probably see themselves as the nobility but are actually little more than crime syndicates. It is this contrast in governmental styles that is most reminiscent of Le Guin. The Dispossessed does something similar.

Neither of these cities, by the way, are the titular location, because neither of them are in the middle of the night side of the planet. That’s a clue for you.

Our guides to these cities are two young student revolutionaries from Xiosphant. Bianca is upper class and oozes natural privilege that has the effect of charming everyone she meets. She is a Leader in waiting. Sophie is one of the few working class students at the university and is a revolutionary because why wouldn’t she be, and because the other students need a person from an oppressed minority to be fighting on behalf of, and to make the tea.

Bianca and Sophie are roommates. Sophie is in awe of Bianca. Bianca loves the fact that someone has faith in her and will follow her anywhere. And then, of course, something dreadful happens.

The political mixture is complicated by the presence of Mouth, the sole survivor of a hippy-like religious group, the Citizens, who chose to eschew city living and instead travel endlessly around the planet’s equator communing with nature, such as it is. The trouble is that nature is getting less and less friendly all the time and no one, not even the Citizens, knows why. Being out there, they were the first victims, but the cities’ days appear to be numbered too.

The question that The City in the Middle of the Night seems to be asking is: How can we hope to survive on a planet that is dying? Hint: murdering each other in a constant quest to retain a large share of dwindling resources is not the right answer. Only Sophie, armed with a good heart, a trusting nature, and a willingness to try anything, has any hope of finding a way forward.

Is there a lesson in there for Planet Earth? I rather suspect that there is. Unfortunately, just like the colonists on January, we are mostly much too busy trying to ensure that “people like us” survive, and “people not like us” don’t, to be able to see it.

Title: The City in the Middle of the Night
By: Charlie Jane Anders
Publisher: Titan
Purchase links:
Amazon UK
Amazon US
See here for information about buying books though Salon Futura