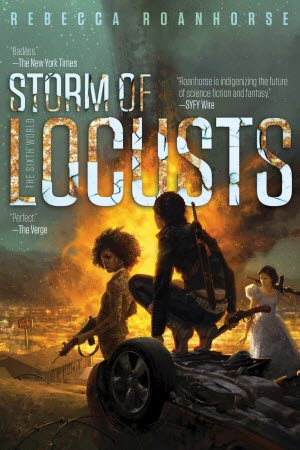 I very much enjoyed Trail of Lightning, the debut novel from Rebecca Roanhorse which, among other things, won her the Award Then Known as the Campbell. I therefore picked up the sequel as soon as I found a copy. The books are part of a series called The Sixth World. They feature a seriously kickass woman called Maggie Hoskie who lives in a Drowned World near future North America. Colorado, being considerably above sea level, has survived the flood, and so has the Navajo nation.

The books are loosely grounded in Navajo mythology and feature not just our dear friend Coyote, but a whole panoply of gods and supernatural beings. Maggie is their version of the human warrior who can challenge the gods. Thanks to the events of the first book, she even has a magic sword with which to do it, though she hasn’t figured out how to make it do magic yet.

Storm of Locusts follows on pretty much directly from Trail of Lightning (four weeks after, according to the back cover blurb). Maggie is still waiting to find out whether her boyfriend, Kai, has forgiven her for [redacted — spoilers]. She’s just had a run-in with a cult leader who calls himself The White Locust when a messenger arrives to tell her that Kai has been kidnapped. From there on the book is pretty much a non-stop adrenaline ride.

There’s a quote on the front cover from the New York Times review of Trail of Lightning. The reviewer asks for a TV series of the Sixth World books. I am tempted to concur, because it ought to be great watching. Unfortunately, people in Hollywood can barely be trusted with stories about African Americans. What they would do with a story about Navajo people is anyone guess. Probably make everyone white.

Consequently, those of you who would quite like a version of Fury Road, but set on Route 66 in the mid-west American desert rather than in Australia, are just going to have to settle for reading Storm of Locusts instead. I can assure you that there is a lot of blowing shit up, and most of it is done by women. The final confrontation is particularly cinematic — something I would expect from a James Bond film, not post-apocalypse urban fantasy.

Of course there has to be more to the book than just gun battles and explosions. There’s some nice tension between Maggie and her companions on the quest, and a fair amount of uncertainty over exactly what this White Locust guy is up to. Also there are locusts, lots of them, because you never get just one. An episode in a white-run community ruled over by a chap who calls himself Bishop gives Roanhorse the opportunity to flourish her feminist credentials and have a go at the capitalist nature of modern American Christianity.

By the end, however, it is clear that Storm of Locusts is a book about family: who belongs and who doesn’t. That’s a complicated thing, particularly in Native American communities where so much intermarriage with the colonisers has happened. I know a little bit about this, because Kevin’s family, on his mother’s side, is part Cherokee and part Arkansas Hillbilly. Kevin, having been raised as a white California boy, is careful not to intrude where he might not be wanted.

Now when it comes to family and weird folks there are basically two extremes: either you are family and they will defend you to the death no matter how weird you are, or your weirdness has brought shame upon them and you get ostracised. Most families, of course, fall somewhere in between. Way too many trans people get disowned by their families, and my experience has been far from a bed of roses, but Kevin’s family have been unfailingly loving and supportive. Also Kevin’s mother and sister both died this year. Which is why I was in floods of tears at the end of this book.

Fortunately for Kevin, I am not a raging ball of violence with a monster-killing magic sword. I don’t need quite that level of forgiveness. Maggie, of course, does. I’m not going to speculate on whether Roanhorse had any specific reasons for writing this book the way she did, but if she’s saying thank you to a family that has accepted her then I’m very happy for her, because I know what that feels like.